ABSTRACT
With the implementation of automation in clinical microbiology, laboratories have digital images which present the opportunity for developing image analysis software for differentiation of growth and colony morphology. COPAN has developed an expert image analysis system that is able to distinguish between positive and negative cultures ad make presumptive determination of colony morphology to determine significant and non-significant cultures. In this study 5,033 urine specimens for bacterial culture were quantitatively plated on sheep blood and MacConkey agar bi-plates by WASPLab using a 1µL loop. Images were reported as: No Growth if the bi-plate contained less than 10 colonies, Non-Significant Growth if growth was considered not pathogenic according to the guidelines inserted in the expert software, and finally Significant when the growth on each plate was to be considered pathogenic according to the expert rules. Results were then compared to manual interpretation as either significant or non significant for pathogens based on laboratory urine culture policy. Discrepancies were blinded and reviewed by a microbiologist. The initial analysis to determine growth or No-Growth yielded sensitivity and specificity of 98.3% and 77.6% respectively. After discrepant resolution, the sensitivity, specificity, NPV and PPV were 99.9%, 80.0%, 99.9% and 68.8% respectively. Next, the images were analyzed for isolate categorization as pathogen or non-pathogen. Based on quantity and type of pathogen images were identified as No Growth, Significant or Non-significant. When evaluated for significance, the image analysis yielded an initial sensitivity and specificity of 93.1% and 80.9% respectively. Following resolution of the discrepancies, the expert image analysis system yielded sensitivity, specificity, NPV and PPV of 99.7%, 82.7%, 99.7%, and 84.1% respectively. These results indicate that the COPAN expert image analysis software is able to differentiate positive and negative urine cultures with a high sensitivity and negative predictive value. This allows for use as a screening tool to eliminate negative and normal flora and would be an effective mechanism to reduce unnecessary review of negative cultures. Future studies may include evaluating enhanced tools to increase the specificity of the image analysis tools for improved organism characterization.

INTRODUCTION
Automation of the microbiology laboratory using WASPLab has revolutionized plating and incubation of cultures. In addition to workflow efficiencies, the laboratory now has digital images of cultures. These digital images now present a novel opportunity for digital image interpretation through the use of image analysis and deep learning algorithms. Studies have already demonstrated the ability of COPAN PhenoMATRIX image analysis to accurately discriminate between positive and negative cultures on chromogenic media for MRSA(1) and VRE(2). These studies demonstrated that image analysis was able to yield a higher sensitivity for detection of positive chromogenic cultures compared to manual evaluation. Here, we evaluate the performance of the COPAN PhenoMATRIX image analysis system for detection of positive urine cultures, the ability of the system to accurately classify organisms into common bacterial phenotypic groups, and implementation of user-defined rules to provide preliminary interpretation of the cultures.

METHODS
Samples
All samples were plated and imaged using a WASP and WASPLab with 1µL of urine struck for guantitation on a Blood Agar/MacConkey agar bi-plate. Cultures were incubated for 18 hours in non-CO2 conditions. Routine urine cultures consisted of 5,053 consecutively collected urine cultures. All contrived samples were generated by spiking known organisms at known concentrations into sterile saline.

Interpretation
Images were taken at the 18 hour time point and evaluated in the WASPLab web application manually and using the PhenoMATRIX system. Cultures were quantitated were generated using routine laboratory methods.

Statistical Analysis
Results generated by PhenoMATRIX were compared to the manual interpretation. Discrepant results were reviewed for accurate organism classification and colony counts and resolved for final interpretation.

Sensitivity, specificity, positive and negative predictive values were obtained for growth and no growth segregation performance. The Cohen’s kappa coefficient was used to determine the interrater performance of the PhenoMATRIX compared to manual interpretation of urine cultures based on user define rules. 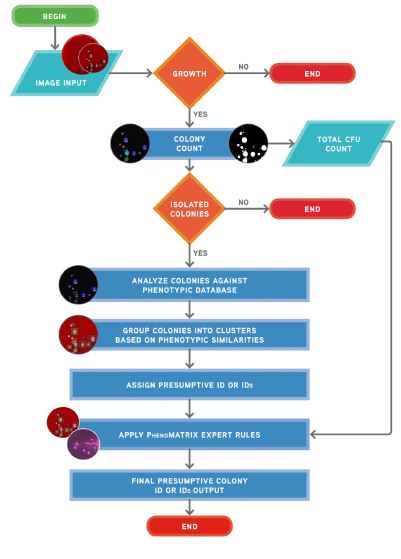