OBJECTIVES
The WASPLab® implementation in our laboratory allows for a complete sample processing workflow and has a software that performs culture image analysis. The use of a fully automated system can significantly reduce the hands-on time for laboratory personnel. The aim of our study was to evaluate the image analysis software for screening of urine culture based upon the number of colony forming units.

RESULTS
The software results were distributed according to the colony count and compared with the final medical report revised by the microbiologist. For the negative results (0-9 range) we had 100% agreement. However, 6/8052 samples were considered negative, even reporting the presence of Streptococcus agalactiae with ≤9 colonies in fertile-age, potentially pregnant women. The software reported presence of growth in the 10-40 colonies range in 1856/14464 specimens (12.83%), while the microbiologist interpreted them negative; this difference was due to an overestimation by the software. In the 41-100 and 101-1000 ranges lactobacilli or other not urinary pathogens were the most frequently identified microorganisms. The software reported two samples with >1000 colonies while no growth was observed. One error was due to a wrong orientation of the plate under the scanner and the other to a  plate with broken agar. No false negative report was obtained by the software (table 1).

METHODS
This study was carried out from December 2013 to September 2014 at the microbiology laboratory of the Niguarda Hospital, Milan Italy. A total of 14,464 urine samples were analyzed. One microliter of urine was seeded on CHROMAgarÔ ORIENTATION (Becton Dickinson, Sparks, USA) by the WASPLab® (COPAN, Brescia, Italy) (image 1); the plates were then transferred to the integrated incubator at 35° C. The images were acquired before the entry (time zero) and after 16 hours (image 2). Image screening was performed on the WASPLab® monitor according to international guidelines: cultures were negative if the colony count was ≤9, whereas if the number of colonies was >9, further evaluation was done. The WASPLab® software allows the automatic evaluation of plates by performing comparative differential image analysis by comparing the time zero images to the images acquired after 16 hours (image 3). 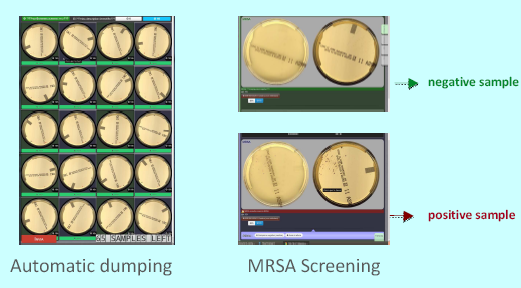 CONCLUSION
WASPLab® image analysis software proved to be very reliable in screening urine samples, with 100% agreement for negative results. Therefore an automatic dumping of negative samples can be hypothesized, with a significant reduction of hands-on time for the operator. Image analysis software also allows sample reading by the laboratory personnel in descending order of colony count, and allows the detection of very small colonies even less than 0.1 mm, that cannot be easily detected by visual reading. Further studies are in progress in order to validate the software for additional types of screening (MRSA, VRE, GBS).

WASPLab® URINE VALIDATION STUDY: COMPARISON BETWEEN 16 AND 24 HOURS OF INCUBATION