WASPLab® URINE VALIDATION STUDY: COMPARISON BETWEEN 16 AND 24 HOURS OF INCUBATION

OBJECTIVES
In recent years, microbiology has undergone a major change through the development of tools that have made it possible to automate many activities. WASPLab® (COPAN, Brescia, Italy) is a modular automated platform that inoculates clinical samples on culture media, transport them to the integrated incubator, and acquires plate images at time zero and after an established incubation time. The aim of this work was to evaluate the performance of this system on urine samples after 16 hours in comparison with the traditional reading at 24 hours.

METHODS
A total of 994 urine samples were analyzed at the Microbiology Laboratory of the Niguarda Hospital, Milan, Italy. One microliter was seeded on CHROMAgar™ Orientation (Becton Dickinson, Sparks, USA) by WASPLab® (image 1). The plates were then transported to the integrated incubator at 35°C. For each plate were acquired images at 0, 16 and 24 hours (image 2). The images were analyzed using the following bacteria load criteria: no growth (NG), growth of <104CFU/mL of any organism (IG1), growth of ≥104 CFU/mL of 2 contaminants (IG2), growth of ≥104 CFU/mL of 1 or 2 urinary pathogens (SG1), SG1 plus a 10-fold lower numbers of a contaminant (SG2), growth at ≥105 CFU/ml of a pure culture of any organism (SG3) (Table 1). 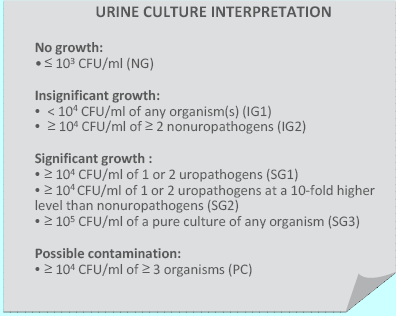 RESULTS
In 933/994 samples (93.9%) the reading at 16 hours showed the same number of colonies compared to 24 hours, whereas in 61/994 samples (6.1%) at 24 hours additional colonies growth was present. Notably in 58/61 samples (95.1%) contaminants were detected (Lactobacillus spp, Corynebacteria other
than urealyticum, Staphyloccoccus haemolyticus). In 3/61 samples (4.9%) we found a significant number of possible urinary pathogens (50 colonies of Saccharomyces cerevisiae, 50 colonies of Candida glabrata with mixed flora, and 100 colonies of Aerococcus urinae with mixed flora) (table 2). After reviewing the images, it was possible to see that colonies of these microorganisms were already present at 16 hours, although barely visible. If the charge is clinically relevant the colonies are already detectable by the software at 16 hours (image 3).

CONCLUSION
A significant number of images obtained after 16 hours agreed with those acquired at 24 hours (93.9%). The clinical interpretation was not different for 991 out of 994 (99.7%) results. We also observed that any increase in the incubation time allowed for the growth of more contaminants than urinary pathogens. Therefore, after reviewing our data, we decided to validate the reading at 16 hours for urine samples.

Comparison of Uriswab to Alternative Methods for Urine Culture Collection and Transport: Confirmation of Standard Culture Methodology for Investigation of Urinary tract Infections