The Copan Walk Away Specimen Processor (WASP™) is an instrument for automated plating of microbiological specimens. The WASP™ (Copan Italia, Brescia, Italy) system includes software that allows selection of various inoculation protocols and streaking patterns. The WASP™ was acquired by our laboratory to facilitate the daily large number of specimen’s inoculation and plating.

OBJECTIVES:
The objectives of this study were to assess:
1.Urine specimens processing performance quality in terms of inoculation loop/volume, streaking pattern, colonies separation or overgrowth.
2.Improvement of laboratory workflow and quality performance in results reporting.

METHODS: This study included 7,000 urine specimens, all collected in UriSwab™ (Copan). Initially 250 samples were tested in duplicate. The WASP™ samples, inoculated with 1 and 10 microliters loops with the streaking pattern “Single streak type 2,” were compared to the current manual method according to laboratory SOPs using 1 and 10 microliters loops. After the evaluation of both WASP™ and manually streaking the results were compared and was noted that cultures plated by the WASP™ were easier to read with more single colonies. From that point all the urines specimens were loaded on the WASP™ and processed using the validated predefined protocol: 1 microliter loop, streaking pattern Single streak type 2, on Columbia Blood Agar with 5% sheep blood and Mac Conkey Agar (OXOID), and incubated overnight at 35°C ± 2 until adequate growth was present. 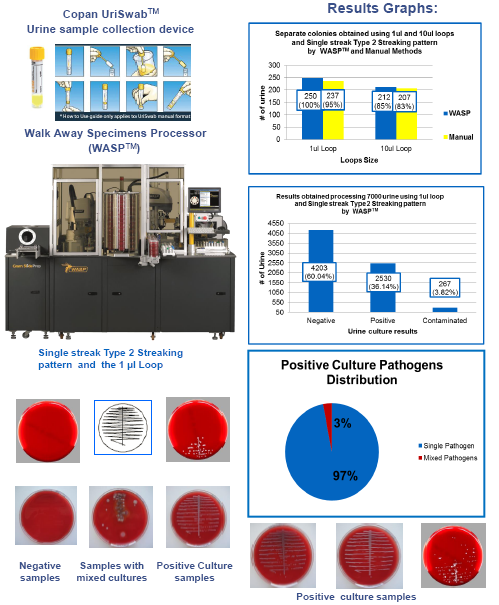 CONCLUSIONS: All urine specimens, collected and transported in UriSwab™, were processed on the WASP™ using 1 microliter loop and Single streak type 2 pattern. Since the introduction of the WASP™ we noted an increased number of isolated colonies using the 1 microliter loop. Result turnaround time and easy reading of isolated colonies improved the urine cultures workup, significantly reduced the handling time for urine specimen processing and facilitated the laboratory workflow.

Automation in the Clinical Microbiology Laboratory

Comparison of Uriswab to Alternative Methods for Urine Culture Collection and Transport: Confirmation of Standard Culture Methodology for Investigation of Urinary tract Infections