Show Up, Show Off, Show Down- A Recap of SWACM 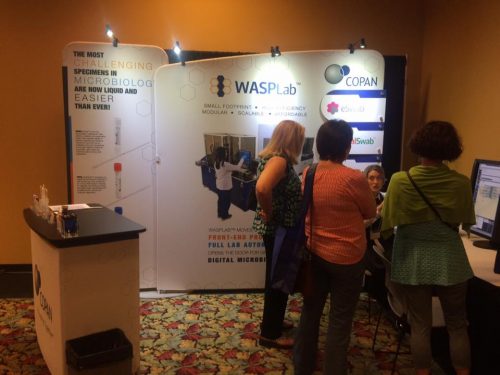 The Southwestern Association of Clinical Microbiology (SWACM) is an organization dedicated to providing continuous education for its members within the clinical microbiology community including Arkansas, Kansas, Louisiana, Missouri, Oklahoma, and Texas. This year COPAN Diagnostics exhibited and hosted an informative and well attended symposium. It was perfect timing for us, as we had a lot of exciting information to share. With help from Dr. Matthew Faron and Dr. Karissa Culbreath, our symposium was a great success!  While our new WASP®DT and WASPLab® demo was a hit at the exhibition floor.

The symposium and lunch were held on Wednesday, September 7th from 11:30 am to 1:00 pm. As WASPLab® users, Dr. Fallon and Dr. Culbreath presented their experience and research highlighting why WASPLab® is the only system available in the clinical microbiology market with unmatched technological advancements. Dr. Faron is the Postdoctoral Fellow of Clinical Microbiology at the Medical College of Wisconsin, located in Milwaukee, Wisconsin. Dr. Faron presented his groundbreaking results from several studies recently published in the Journal of Clinical Microbiology including, “Automated Scoring of Chromogenic Media for the Detection of MRSA using the WASPLab® Image Analysis Software” and the “Automatic Digital Analysis of Chromogenic Media for Vancomycin Resistant Enterococci Screens using the Copan WASPLab®.” Dr. Fallon discussed how, in the MRSA study, research confirmed the accuracy and dependability of COPAN’s Chromogenic Detection Module (CDM) for sorting positive and negative cultures for MRSA using chromogenic agar. The study was highly anticipated as it was unique in its nature for a few reasons. First, the study involved several locations across the globe, including the United States, Canada, Italy and the Netherlands. Second, the Chromogenic Detection Module worked well on different manufacturers’ media. In addition, an unprecedented number of 57,690 samples were included in the study. Ultimately, WASPLab® demonstrated 100% sensitivity and reported between 90-96% specificity, varying slightly by location, and was able to accurately flag positive cultures that were missed by the human eye.

As for the VRE study, 104,730 specimens were examined and not a positive culture was missed by the WASPLab® software. In fact, from all the specimens 498 samples were determined positive by the automation and were missed manually! The similarity with the MRSA study was that the Chromogenic Detection Module works with different manufacturers’ media; it was a multicenter study; and there were not any false negatives by the software. Here the WASPLab® software had 100% sensitivity again, with 89.5% specificity (varying by locations). In both cases, the software was able to detect positive growth on plate, that may have otherwise been marked negative by the human.

Dr. Culbreath, who is the scientific director at the TriCore Reference Laboratories, located in Albuquerque, New Mexico, rounded up the conversation with some interesting results from her laboratory regarding quality, turn-around time, and return on investment since the implementation of WASPLab®. TriCore Reference Laboratories has a large scope and is responsible for more than 70% of New Mexico’s laboratory test information. Her initial research shows that with the recent implementation of the WASPLab® system, her site already reported 4 hours fewer were spent reading urines over two shifts! In addition, the screening and reading of urines could be done within 18 hours, and general turn-around time was improved by 7 hours. Financially, there was over $45,000 in annual cost savings from automatically processing urine cultures alone. That doesn’t even include additional culture types, which will be processed on the WASPLab® soon. In addition, there was an overall improvement in patient care, as faster results impacted the course of some patient treatment. As if the presentations and data were impressive enough, and in addition to all the exciting results, COPAN had another surprise for the exhibit.

COPAN’s portable demo, which is a mobile representation of our WASPCore and WASPLab® software, drew a crowd of attendees to the booth. Our team setup a table with a monitor and allowed guests a chance to experience the process of creating protocols on the WASP®DT. Protocols are created with a drag and drop mechanism and are intended to be synchronized with any laboratories preferred workflow. The protocol mechanism allowed users the chance to become familiar with WASP®DT software, first hand. In addition to the WASP®DT software, WASPCore, the demo also includes the same software that a technologist would find on the WASPLab®. In the WASPLab® portion of the demo, laboratory professionals can view our dashboard, which includes the stages of workup with sorting, reading, and picking. Show attendees can see the real life images of culture plates, which are not only larger than life, but include 3 different types of lighting, and a 3-dimensional module that allows them to move the image in any direction, just as they would on their actual workstation with the WASPLab software. The demo includes a library of archived images so you can see the algorithms at work as they segregate growth from no growth. SWACM attendees even had a chance to view the same segregated images that were included in the MRSA and VRE studies!

With so much innovation, it can be challenging to get all of our latest information fast enough! It seems before the press release is even finished, we have something else to share. Our chance to exhibit at shows is a great way for us to get (and keep) in touch with the community that we serve on all the exciting developments. We’re grateful for every chance we get to present and exhibit and believe it is important to stay connected, as so many of our breakthroughs come from direct feedback from you. These shows are also the perfect opportunity for you to tell us what you think! So, if you didn’t get a chance to catch us at SWACM, come say hello and try out our demo yourself at the SCASM meeting in La Jolla, CA on October 27-29! We look forward to showing off all the latest breakthroughs!