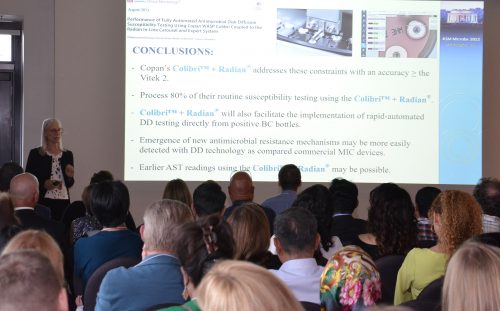 The 2022 American Society for Microbiology Microbe Conference was held this June in Washington, DC.  Members of the Microbiology community were thrilled to come together in person for this meeting for the first time since 2019.  In this Research Roundup, we highlight three posters that examined COPAN’s full laboratory automation which showcase the ability of the automation and software to select and process colonies for accurate identification by MALDI-TOF mass spectrometry (MS) and for antimicrobial susceptibility testing using the bioMerieux Vitek 2.

Evaluation of the Colibrí™ from Copan for automated MALDI-TOF spotting

In this two-site study, Heath Network Laboratories (Allentown, PA) and Kaiser Permanente (Portland, OR) colonies from routine culture plates of urines, wounds, blood cultures, and respiratory specimens were incubated in the WASPLab® and assigned pickpoints after 18 to 24 hours of incubation. The culture plates were then transferred to Colibrí™ for automated MALDI ID plate spotting and matrix application. Manual spotting was then performed using the same or ‘like’ colonies. A total of 242 bacterial organisms were compared. 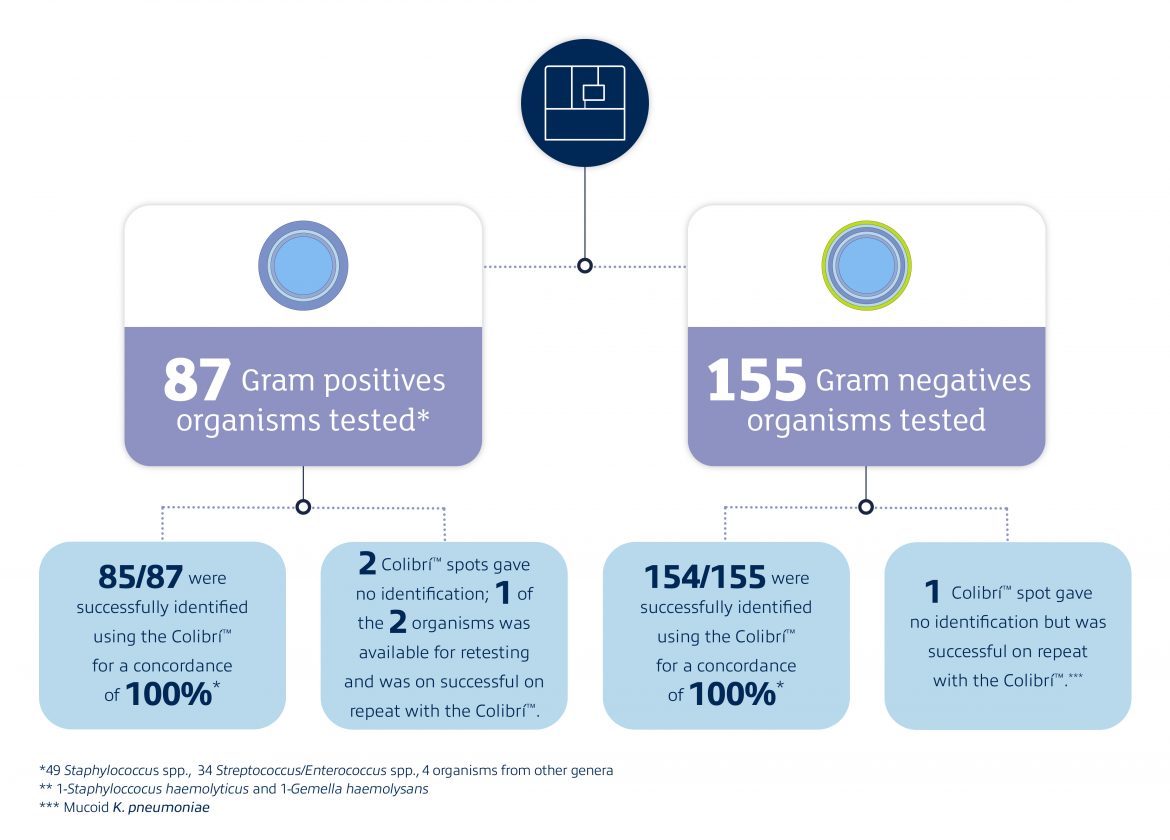 Of 87 Gram-positive organisms (49 Staphylococcus spp., 34 Streptococcus/Enterococcus spp., and one organism from four other different genera) 85/87 were successfully identified using the Colibrí™ for a concordance of 100%. 2 Colibrí™ spots (1-Staphyloccocus haemolyticus and 1-Gemella haemolysans) gave no identification; the S.haemolyticus was available for retesting and was successful on repeat with the Colibrí™. 154/155 Gram negative organisms were compared with a concordance of identification of 100%. One Colibrí™ spot was unsuccessful with a mucoid K. pneumoniae but was successful upon repeat testing.

Only two discrepancies were observed:

1) Streptococcus agalactiae (manual) / Proteus mirabilis (Colibrí™).
NOTE: This was believed to be an incorrect plate tested.

The accuracy of identification between the two methods was 99.1%. No purity plates were examined in this study and repeat testing was not performed. 4.4% of organisms yielded no identification when tested by MALDI-TOF processed by Colibrí™ (4 Enterococcus faecalis, 3 Streptococcus agalactiae, 1 S. gallolyticus spp., 1 S. pyogenes and 1 E. coli); these isolates were also not retested, but by procedure, these isolates would be repeated with manual spotting and were not considered discrepant results.

A high level of concordance between manual and automated processing was observed.

Colibrí™ helps to standardize spotting and provides traceability from plating to organism identification.

Colibrí™ is an accurate method for preparation of MALDI-TOF target plates.

A Study Comparing AST testing using McFarland suspensions prepared by the Colibrí™ to those prepared Manually.

In a third study, presented at ASM Microbe 2022 and performed at Kaiser Permanente (Portland, OR), Dr. Kendall Bryant used the Vitek 2 (V2) AST system to compare McFarland suspensions prepared by the Colibrí™ to those prepared manually.  106 organisms were compared in the study (56 GNR, 50 GPC) using V2 antibiotic panels. The organisms were comprised of clinical isolates and reference organisms from the CDC AR Isolate Bank. A total of 1,732 drug/bug combinations were tested.

There were 6 discrepant results in categorical interpretations:

This gave an overall categorical agreement of 99.75%.

There were 5 instances of > 1 dilution difference in MIC results between the two methods.

1.) The performance of the Colibrí™ is equivalent to manual methods for McFarland suspension preparation used for V2 susceptibility testing.

2.) There was 99.75% categorical agreement and 99.99% agreement in MIC values (within +/-1 dilution) when comparing the Colibrí™ and the manual method for AST preparations.

3.) The Colibrí™ provides an automated option for the highly repetitive task of Vitek 2 AST setup freeing technologists time to perform other tasks in the laboratory.

The Roundup: Conclusions on Findings from ASM 2022 Posters on Colibrí™

These three posters show the ability of Colibrí™ to accurately spot MALDI ID plates and accurately prepare antibiotic susceptibility suspensions for automated testing.  The use of Colibrí™ for MALDI plate spotting and AST preparation is an automated, labor-saving step that will allow technologists to perform other, more highly skilled duties in the laboratory.

With tens of thousands of scientific papers published each year, it is hard to stay informed on the relevant research. Each month COPAN’s Research Roundup will feature a comprehensive review and commentary on recent scientific publications covering a particular topic by experts in the field to help keep you up to date on the latest research. Sign up today so you don’t miss the latest findings!

Dr. Sharp has recently served as an Advisor to the CLSI Antimicrobial Susceptibility Testing Sub-Committee and she is a current member of the CLSI AST Resistance Working Group as well as the Methods Application and Interpretation Working Group.  She is also an active member of the Board of Scientific Councilors for the Office of Infectious Diseases of the Centers for Disease Control and Prevention.  Dr. Sharp is a Past-President of ASM and a former member of ASM’s Board of Directors. Dr. Sharp has given numerous lectures, seminars and workshops locally, nationally and internationally, and has numerous publications in the field of clinical microbiology.  Her most prominent area of interest has centered on cost-effective, clinically-relevant diagnostic microbiology.