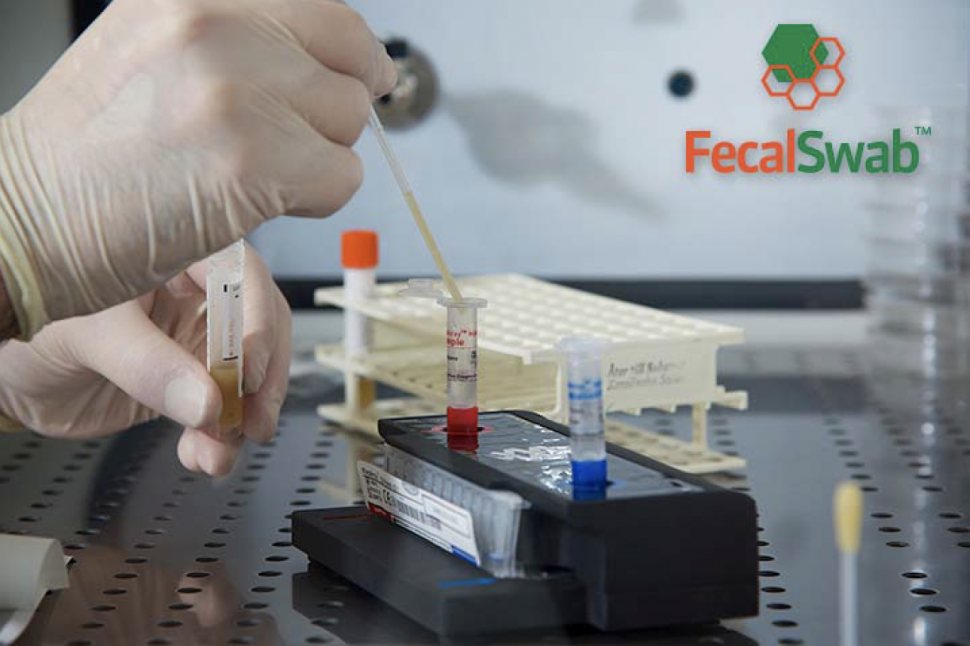 When it comes to stool, sometimes less is more. A recent study published in the Journal of Clinical Microbiology titled “Evaluation of the New FecalSwab™ to Maintain Stability of Stool Samples Submitted for Molecular Tests” concluded that this is particularly true when taking advantage of the convenience and accuracy of COPAN’s latest product addition: FecalSwab™. The study, released on March 15, 2017 set out to determine the most effective, rapid and least invasive method to collect stool samples and quickly treat patients suffering from gastrointestinal diseases.

The Scoop on the Study

The causes of gastrointestinal diseases, which account for a significant number of deaths across the globe, are varied. Pathogens from bacteria, viruses or parasites can cause the painful symptoms associated with these diarrheal diseases. A team of researchers from the Pathology Department at the Tampa General Hospital in Tampa, Florida recognized that rapid molecular multiplex testing is revolutionizing patient diagnosis. Since it was recently introduced into the enteric diagnostics spectrum, the group decided to examine the best devices to obtain quick and accurate results.

Yet, even in the revolutionary face of molecular testing, maintaining viability of the bacteria is still important so you can reflex the sample for traditional culture, antimicrobial susceptibility testing and epidemiology typing. Therefore, the team set out to evaluate the effectiveness of COPAN’s FecalSwab™ for the “qualitative detection and identification of 22 GI pathogens” using Biofire’s FilmArray® GI Panel on the FilmArray® System.

The breakthrough design of COPAN’s FecalSwab™ makes it a convenient dual purpose system for the collection of rectal swab samples or for the transfer of feces directly from fresh stool samples. The kit is packaged in a peel pouch that includes one tube with 2mL of Cary- Blair medium and a flocked swab. Thanks to the small, plastic and instrument-ready tubes and the breakable swab, the specimens journey to the lab is much easier. It is important to mention that FecalSwab™, used as a rectal swab collection device is not FDA-cleared for use with Biofire’s FilmArray® GI Panel.

One stool sample was submitted from 103 patients and evaluated during this study. Researchers used two separate protocols during the study. The first, or Standard of Care protocol involved suspending a fresh fecal sample in Cary-Blair medium and transferring approximately one gram of the stool sample received to a tube fitted with a screw cap and filled with 15mL of Cary-Blair.

The FecalSwab™ protocol was simpler and involved less fecal matter. Using the flocked swab, FLOQSwab™, included in the kit, researchers transferred a small amount of fresh

stool into the tube. Next, the tip of the flocked swab was inserted in the fecal matter and then rotated. The team then carefully transferred the swab into the FecalSwab™ tube. Lastly, the vial was mixed until the sample appeared homogeneous.

A Fresh Take on Molecular

Researchers then proceeded to test the samples on the FilmArray® platform per the manufacturer’s instructions. The team used 200µL of the stool samples from both the FecalSwab™ and the traditional C&S culture transport vial. In addition, a stability analysis was performed to assess the transport media’s capability to preserve the sample’s nucleic acid. Results from both protocols were then compared. A total of 33 or 32 percent of the patient results were negative, while 70 or 68 percent tested positive for pathogens. The most common pathogens detected were C. difficile, Norovirus and E. coli.

A side-by-side comparison of the Standard of Care, which uses a C&S vial, and FecalSwab™ procedures revealed that 97 percent of the results were identical. Scientists hypothesized that the three discrepancies were due to low levels of pathogens.

There’s No Need for Excess with FecalSwab™

Who wants to deal with an excess of stool samples? How many times have test results been delayed due to a patient’s inability to produce a sample?

This study reveals that specimens from COPAN’s FecalSwab™ provide accurate results with both stool culture and molecular testing of enteric pathogens. In addition to needing less stool for accurate results, this study demonstrated that FecalSwab™ will maintain samples for 24 hours at room temperature.

When less is more, the results show that FecalSwab™ is an excellent device that improves patient care by optimizing the collection and transport of fecal samples for rapid diagnostic of gastrointestinal diseases.

With a reputation for innovation, COPAN is a worldwide leader in the manufacturing of collection and transport systems. Copan’s collaborative approach to preanalytics has resulted in Flocked Swabs, ESwab, Universal Transport Medium and laboratory automation, WASP® and WASPLab™. COPAN’s collection and systems have been proven to advance the quality of traditional and contemporary microbiology assays. COPAN’s automation includes specimen processing, smart incubation, digital imaging, and strong algorithms for automatic segregation of bacterial cultures, followed by automated colony picking. COPAN carries a wide range of environmental sampling products for the food, beverage, hospital and pharmaceutical industries. For more information, visit https://www.copanusa.com/