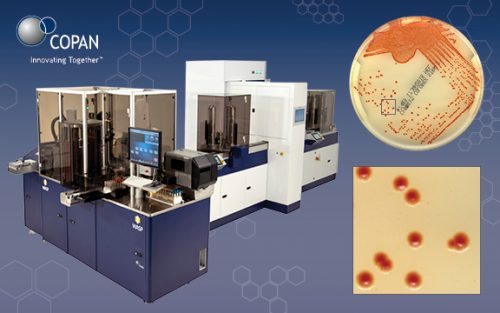 Traditional culture is the gold standard when testing for Group A Streptococcus because of its sensitivity compared to rapid antigen testing, and its lower cost compared to PCR. The increased adoption of automation and digital microbiology across the world is changing different aspects of the laboratory, and it is opening new doors for the use of chromogenic culture media. A recent example can be found in a poster presented at the 2018 annual ECCMID conference held in Madrid, Spain entitled “Digital Detection of Group A Streptococcus using Colorex Strep A CHROMagar and WASPLab® Chromogenic Detection Module.” In this study, COPAN WASPLab’s PhenoMATRIX™ was tested in conjunction with a new chromogenic media, Colorex Strep A by CHROMagar, for the ability to accurately detect and segregate orange GAS colonies automatically.

For laboratories that receive a large volume of GAS samples from pharyngeal swabs, culture can be an arduous task that could be streamlined using automation. By utilizing WASP®DT, the laboratory can easily plant and streak the samples. By adding the PhenoMATRIX™ Chromogenic Detection Module (CDM), the study set out to automatically detect and interpret orange GAS colonies on a novel chromogenic agar called Colorex Strep A Agar (CHROMagar, Paris, France).

How They Did It:

From September 2017 until January 2018 to test both PhenoMATRIX™ and the new CHROMagar, 250 pharyngeal samples, which had been taken with ESwab™ were enrolled in the study. The samples were obtained from pediatric patients presented to the Emergency Department at Children’s Hospital Los Angeles with presumed bacterial pharyngitis. Samples were tested for the presence of GAS by PCR (Lyra Direct Strep Assay, Quidel, San Diego, CA). Following the Lyra assay, both the negative and positive ESwab™ samples were inoculated onto a blood agar plate (BAP) and a Colorex Strep A agar, using WASP®DT, and then incubated in the WASPLab® for 24 hours per the manufacturer recommendations. Medical technologists then viewed the plates for orange colonies and their results were tested against those of PhenoMATRIX™. Any of the orange colonies that had been observed were also confirmed by Matrix Assisted Laser Desorption/Ionization – Time of Flight Mass Spectrometry (MALDI-TOF MS).

No Potential Positive Left Behind

Upon overall review, the results found COPAN’s PhenoMATRIX™ to be 100% sensitive with a specificity of 96.5% versus the manual reviews by the technologists, which had a sensitivity of 96.5% and specificity of 100%! The results of the validations that were performed with the MALDI-TOF MS for the orange colonies on the Colorex Strep A agar found that of the 57 cultures, 51 of them were confirmed GAS with MALDI-TOF MS. 4 additional cultures that grew orange of the 6 remaining were found to be: 2 Staphylococcus simulans, 1 Staphylococcus aureus and 1 Kocuria rhizophila. The final 2 from the last 6 were unable to tested by MALDI-TOF. In addition, it is important to note that there were 5 specimens that were initially PCR positive that did not grow in culture on the Colorex Group A Strep Agar.

COPAN’s PhenoMATRIX™ purposefully sets the threshold low so that no potential positives are missed. Any negatives are easily discarded with confirmatory review by the technologists and the important plates are given additional care.

The Case for Color in Culture

The presentation of this study shows the ability of groundbreaking PhenoMATRIX™ to detect GAS when used with the innovative CHROMagar, Colorex Strep A Agar. It also demonstrated the agar’s great sensitivity when compared to an FDA cleared PCR assay for GAS, and overall superior performance to that of regular culture on a blood agar plate.

Other studies have proven that the PhenoMATRIX™ CDM software can effectively identify and segregate colonies on chromogenic media when testing for VRE and MRSA. Adding the ability of the software to identify GAS colonies on chromogenic media with 100% sensitivity is promising and exciting. It allows the laboratories to improve their turnaround time and increase the utilization of the full lab automation. It allows the technologist to truly focus on the positives, especially those that could have been missed by manual reading. This added capability moves us a step closer to never touching a negative plate again and specifically evaluates the potential for PhenoMATRIX™ to be used in diagnostic microbiology.