Mycoplasma genitalium: The Guest You Don’t Want to Bring Home… 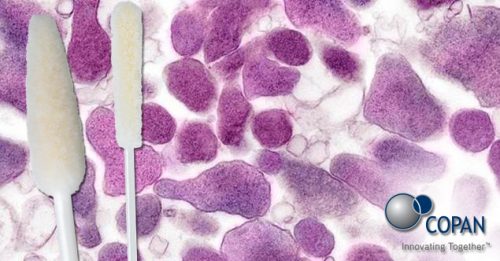 …But, don’t worry Copan’s flocked swabs can help “sweep” it out of your home!

“New” isn’t exactly a word anyone wants to hear when discussing Sexually Transmitted Infections (STI). And although Mycoplasma genitalium isn’t new per se, as it was first discovered in the early 1980s when isolated from the urethral specimens of two men with non-gonococcal urethritis, it has only recently received recognition and not for the right reasons.

The U.S. Centers for Disease Control and Prevention (CDC) recently highlighted the antibiotic resistant organism as a serious emerging issue in its most recent publication on STI guidelines. So exactly what is this scary sounding superbug?

If Mycoplasma genitalium, or M. genitalium, was a person, it would be that aloof high school crush that always seemed just out of reach. The Jordan Catalano of bacteria. For all the non “My So -Called Life” fans, that means this sexually transmitted pathogen is a challenge to study, detect and treat because the fastidious organism is difficult to culture. How difficult? Well, even when culture is successful, it can take up to six months to grow.

Couple that challenge with the fact that the pathogen is antibiotic resistant, and it’s easy to see why M. genitalium is basking in the medical spotlight. Superbugs are well known in the medical community, with much of the focus dedicated to the growing Hospital-Acquired Infections arena. Yet, the emergence of this pathogen requires a new testing and treatment model. Since culture is a challenge, molecular or Nucleic Acid Amplification Testing, is the only practical method to reliably identify the bacteria.

Due to the low level of mycoplasmas in some patients, sensitive tests with a low limit of detection are necessary to achieve sufficient assay sensitivity. Until recently, an approved commercial assay was not available on the market

That changed with the recent release ResistancePlus™MG a new screening test developed by SpeeDx. The Australian-based company’s assay is the sole test available that simultaneously identifies M. genitalium and detects azithromycin resistance of this difficult-to-treat STI.

SpeeDx’s new test is available on the European and Australian markets. The company is currently seeking FDA approval for the U.S. market.

Still, M. genitalium is often asymptomatic, particularly in women. The infection can cause a range of symptoms including urethritis, cervicitis, endometritis and pelvic inflammatory disease.

The prevalence of M. genitalium in the general population ranges from 1 to 3 percent, with the prevalence of this pathogen slightly exceeding the prevalence of Neisseria gonorrhoeae in women.  But among high risk patients it fluctuates between 10 to 40 percent. In women, M. genitalium can be found in the vagina, cervix and endometrium. The pathogen can be detected in 10 to 30 percent of women who present with clinical cervicitis. Studies suggest a strong association between past infection with M. genitalium and infertility. Samples can be taken from men from urine or with a urethral swab  and a cervical swab for women. In fact, a Swedish study titled “Time to Eradication of Mycoplasma genitalium after Antibiotic Treatment in Men and Women” published in Journal of Antimicrobial Chemotherapy successfully uses COPAN’s flocked swabs to sample females in the study  “to evaluate the time to a Mycoplasma genitalium-negative test after start of treatment and to monitor if and when antibiotic resistance developed”.

The Future of Resistance

With the evolution of so-called superbugs, diagnosing and treating sexually transmitted infections will continue to be a challenge. Antimicrobial resistance is likely to increase because of the high number of infections, antibiotic overprescribing and the superbugs’ incredible ability to continually find new ways to battle treatment.

The best defense to this global public health issue is offense. Quickly diagnosing and effectively treating Mycoplasma genitalium before it can spread is crucial.