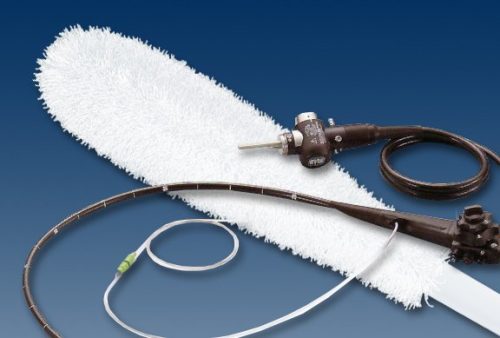 Recent outbreaks of carbapenem-resistant Enterobacteriaceae infections associated with duodenoscopes have highlighted the challenge of cleaning and high-level disinfection of these instruments. The Food and Drug Administration has suggested that duodenoscope surveillance by microbiological culturing, along with strict adherence to reprocessing protocols, may help reduce the risk of duodenoscope-associated infection transmission. While the Centers for Disease Control and Prevention (CDC) published interim guidelines for duodenoscope culturing in 2015, these have not been rigorously investigated, and the performance characteristics are unknown. A recent JCM publication described a new user-friendly duodenoscope sampling and culture protocol utilizing Copan Flocked swab demonstrated a 2-fold increased recovery rate of Gram-negative organisms compared to the CDC method. The new protocol was referred to as the Modified ESGE protocol. As the inventors of the flocked swabs, Copan is always excited and proud to see new applications of it’s technology that make a difference to patient care.

Serious post duodenoscope procedure infections, including antibiotic-resistant Enterobacteriaceae infections over the past years have been attributed to the complex design of the duodenoscope, which includes an instrument/suction channel with a cantilevered  elevator mechanism that allows for the manipulation of equipment during procedures. This elevator mechanism contains microscopic crevices that can retain organic debris and fluid despite brushing and cleaning prior to high-level disinfection.

The study noted that the brush recommended by the interim CDC protocol did not completely reach the entire surface of the elevator in either the raised or the lowered position. To visually compare the efficacy of the brush versus the Copan Flocked Swab at sampling the elevator mechanism, the researchers coated the distal end of a duodenoscope with GlitterBug potion (Brevis) before sampling and after application of the swab or brush. The residual GlitterBug coating the elevator mechanism was qualitatively lower by visual inspection after using the flocked swab compared to the brush.

The flocked swab also proved to be simple to snap off into the collection vial, minimizing risk of contaminating the culture, whereas the entire duodenoscope brush is dropped into the collection fluid, including the handle that had been held during collection. The protocol requires that sterile gloves must be worn; however, the collector has likely been handling the collection cup, endoscope, and other items and may introduce contaminants into the sample fluid from the brush itself. The flocked swab prevents this possibility, as it is broken off into the sample fluid below the handling point. This also allows for the use of nonsterile gloves, which is more realistic for completing sampling in an endoscopy department instead of in a dedicated microbiology laboratory.

The sampling using the Modified ESGE protocol with a flocked swab led to a 2-fold increase in recovery of Gram-negative organisms compared to the CDC protocol. In this study Escherichia coli, Klebsiella pneumoniae, Pseudomonas aeruginosa were used as Gram-negative test organisms. This researchers stated that the higher recovery rate is likely due to the use of the flocked swab for collecting samples from under and around the elevator mechanism as opposed to use of the cleaning brush. Flocked swabs are designed to capture and release organisms, and they are able to fit under the raised elevator mechanism more efficiently than the recommended cleaning brush. The brush bristles do not extend around the head of the brush, limiting complete sample collection in tight spaces. The brush is able to fit more effectively into the instrument channel for which it was designed. However, the elevator mechanism has been identified as the likely structure for reprocessing failures, making it more likely than the channel to harbor organisms after an unsuccessful cleaning and reprocessing.