ESwab™, Group A Strep, and the Shift Toward Molecular Assays 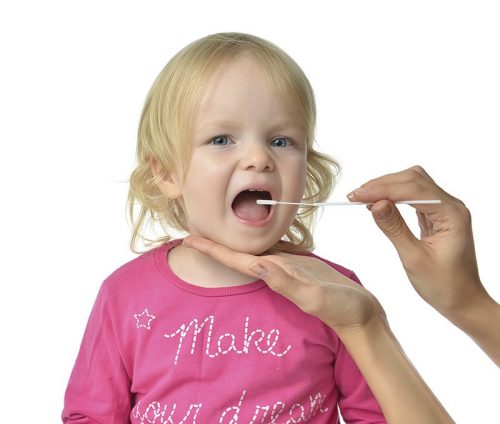 Chances are you’ve experienced the sensation of waking up in the morning only to notice a tight scratch in the back of your throat. The effervescent optimist will dismiss the nagging burn and hope the discomfort will pass on its own. Most of us would prefer to gargle salt water, load up on popsicles and call it a day. Sometimes this method works. The truth is a sore throat can be caused by a variety of diseases and many have similar symptoms. If a sore throat from certain types of infections goes untreated without antibiotics, it can develop into more serious complications, such as a pharynx infection or scarlet fever! Because it is so easily treatable, it is less common in developed countries, but occasional outbreaks do occur. Because of this, it is important to remain vigilant when it comes to potential exposure to Group A Streptococcus (GAS).

Typically, clinics either diagnose patients empirically or rely on Rapid Antigen tests. These methods lack sensitivity, and a culture is still necessary to confirm negative results. This requires more time and can affect the course of antibiotic treatment, as it is best to start fighting the infection as soon as possible. Furthermore, the prescription and use of unnecessary antibiotics just encourages the development of antibiotic resistance in the community. Due to such limitations, tests that offer greater speed and accuracy for the clinician would prove to be advantageous.

In order to embrace the evolution in diagnostic testing, it is helpful to understand the past and current methods and the challenges each option presents. Traditional rapid antigen detection tests (RADT) work by using antibodies that cause a reaction if they come into contact with specific antigens. If the specific antigen is present, it will cause a “positive” result in the test, usually indicated by a color or line. Because of their excellent rate for specificity, a positive result is trusted and treatment can be administered quickly. However, Group A Strep is sneaky. Due to the increase of asymptomatic GAS colonization, current guidelines require any negative test be sent to the lab to be confirmed by culture. So…SHAPES everybody! It’s similar to the rule that a square can be a rectangle, but a rectangle can’t be a square. A negative can be a positive, but a positive can’t be a negative. These antigen tests are common in the United States, particularly at the Point of Care (POC). In other countries health care reimbursement plans do not support the cost of rapid POC antigen tests, so swab samples are sent directly to a clinical microbiology lab, where a rapid antigen test might be performed directly on the swab sample but always a full culture would be done. Whichever route of diagnosis is taken, until now, has usually lead to culture backup for final confirmation of negative Strep throat.

In the laboratory setting, more accurate and more sensitive molecular testing for Strep A has recently emerged but, this still entails a delay in transporting samples from point of care to the laboratory. So the physician still has the dilemma of whether to treat the patient empirically or wait for the lab results to come back. The breakthrough would be to make the molecular assay technology simple enough so that it could be done quickly, by a nurse or a physician’s assistant at the point of care.  First on the market in this new wave of point of care, molecular assays is the Alere™ i Strep A, (manufactured by Alere™,) which will be discussed further in the blog. The science behind molecular assays in a lab setting requires various instruments, pipetting and multiple steps and has been too complex to be adopted in the physician’s office. Within the last few months however, we have seen the launch of the first of a new generation of waived rapid POC molecular test for Strep A! Molecular assays work by detecting the sequences in DNA or RNA that either are or are not associated with a particular disease. The highly complex chemistry within the assay is what splits down the DNA and purifies the nucleic acid. The extraordinary characteristic about DNA is that if split, it will seek out and connect to its counterpart. Working similar to a photocopy machine, then those two split off and reproduce and the DNA will continue to grow its tiny DNA army so that the amplification grows high enough, for the test to detect the presence of the disease causing organism (a key component missing from the sensitivity of the RADT). And VOILA! You’ve just created a highly sensitive, extremely rapid molecular test that can be performed in the laboratory and now at the point of care with a turn-around time under an hour. This enables a more accurate and sensitive diagnosis and the prescription of antibiotics within the same day!

As for the Alere™ i Strep A, the test is an isothermal nucleic acid amplification test, that uses a nicking enzyme amplification reaction (NEAR), which can provide results in under 8 minutes at the point of care! This technology replicates the DNA at a continuous temperature between 55° C to 59° C. In a recent study, the Alere i Strep A was found to have a 96.0% sensitivity and 94.6% specificity, which validated the PCR as an acceptable, one-step rapid testing method for GAS pharyngitis, eliminating the need for backup testing on negative results.

ESwab™ in a Molecular World

As advances in diagnostics and microbiology evolve, and ESwab™ continues to gain notoriety as a versatile, liquid-based collection and transport system, manufacturers and laboratory professionals are endorsing additional applications for its use.  For example, several molecular assay manufacturers have qualified ESwab™ as an approved collection device, including the Alere™ i Strep A, and the Solana™ GAS Assay manufactured by Quidel®, which you can find in the package inserts. Furthermore, many microbiologists are proactively testing with ESwab™ and finding it to be an acceptable alternative to traditional collection devices. An example of this is demonstrated in a study of the illumigene®  from Meridian Bioscience, ® Inc, entitled the Molecular Diagnosis of Group A Streptococcus.

This study focused on the rapid diagnosis of acute rheumatic fever (ARF), which can develop if Group A Streptococcus has not been treated properly. New Zealand experiences rather high rates of ARF, most commonly among school aged children. The Rheumatic Fever Prevention Program (RFPP) has been compelled to seek out solutions that quickly detect and treat GAS. To test the illumigene®, 757 swabs were taken from school-aged children, using ESwab™. Once at the lab the transport media was vortexed and 50µl was placed in the illumigene® and 50µl was used for culture. Results were cross referenced and use of the swab allowed for retesting if results from both methods offered inconsistencies. Swabs were preserved at room temperature and arrived in the lab up to 8 hours later. Overall, the illumigene® performed well, with only a slight drop in specificity (100% to 98%) in comparison to the culture, but the assay provides more sensitivity with a higher rate of true positivity. The use of ESwab™ in this study was a deviation from Meridian’s recommendations to use just the swab applicator itself. However, an examination of result discrepancies through retesting, reports that pipetting 50µl of ESwab™ transport media offers acceptable performance. Retests were performed using the same sample of transport media on another culture and a different molecular assay. This reexamination would not have even been possible with a traditional swab.

The benefits of using ESwab™ are twofold. When a regular swab is used for an assay, the chemistry actually destroys the swab sample rendering the specimen unusable for any further investigations. By collecting specimens with ESwab™, you have 1ml of sample suspension no just 1 swab so you have plenty of sample for additional testing or retesting, if necessary. Additionally, you have remaining sample left for the culture! As the technologies continue to improve, COPAN’s ESwab™ not only remains nimble, but embraces the shift towards more molecular platforms. ESwab™ is well suited to the next generation of diagnostic technology in microbiology and is truly a “Universal Swab.” ESwab™ still can’t call you in sick for work, but will happily assist in the diagnostics to keep you safe and healthy!