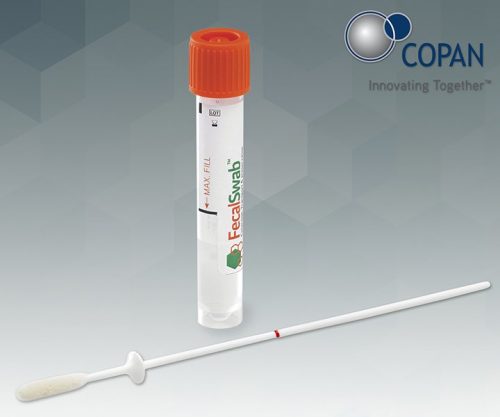 GI Pathogens can be difficult to detect due to the lack of sensitivity and speed experienced with traditional methods and patients having trouble providing a timely specimen. To help remedy these issues COPAN’s FecalSwab® (FS) has been the focal point of several recent evaluations.

As a kit, FecalSwab® comes with a regular COPAN flocked swab (FLOQSwabs®) and 2 mL of Cary-Blair medium. Many clinicians have considered using the flocked swab as a rectal swab, in scenarios where timely access to a sample is crucial, and ability to collect a fresh stool is unmanageable.

There is an unmet clinical need in pediatric settings when the patient shows up with acute symptoms and a sample needs to be immediately obtained for testing. In a continuation of an earlier study, Dr. Chapin and her team presented Comparison of Results Obtained with the FilmArray GI Panel Using Rectal Swabs and Cary-Blair Stool from Patients with Gastroenteritis in the Pediatric Emergency Dept., which entailed studying the use of FecalSwab® as a rectal collection device that could be administered upon patient visit in conjunction with a widely accepted rapid detection assay, the FilmArray Gastrointestinal Panel (BioFire Diagnostics).

While FecalSwab® has had FDA clearance since Spring of 2015, the use of FS as a rectal swab collection device used in conjunction with a molecular FilmArray GI Panel has not been cleared by the FDA.

Putting FecalSwab® to the Test with 959 Samples!
Over 959 pediatric patients experiencing gastroenteritis were examined. The anatomically designed rectal flocked swab contained in the FecalSwab® used in the study was designed to reach the transition zone of the rectum for sampling in young children.  For this study, the clinicians took both a rectal swab using FecalSwab® paired with the rectal swab and obtained Cary-Blair stool specimens for comparison from each patient spanning from three different hospitals.

In addition, the discrepancy was low as the Cary-Blair version found 32 different pathogens, compared to the rectal swab which found 26. Thus, results deemed FecalSwab® collected as a rectal swab comparable to Cary-Blair stool for the detection of gastroenteritis pathogens using the FilmArray GI Panel.

Benefits of FecalSwab® as a Rectal Swab
FecalSwab® as a rectal swab facilitates immediate collection upon a patient visit and accelerates the turnaround time for actionable results, which ultimately improves patient care. With the understanding that sometimes additional needs are uncovered from the adoption of the product, COPAN is pleased to announce the release of the FecalSwab with the pediatric rectal swab kit!

Introducing the New Rectal FecalSwab®
This new product is kitted like the traditional version including 2mL of Cary-Blair, but contains a rectal FLOQSwab® which was anatomically designed to reach the transition zone of the rectum for sampling the rectal mucosa and epithelium specifically in young children.  The new swab is fitted with a stopper, located below the flocked head. The length at which we placed the stopper has two functions, one to reach the transition zone and the other to prevent patient injury and improper sample collection!

The Future of FecalSwab®
Like most of our innovations, the application is driven by the Clinical Microbiology community. The rectal FecalSwab® kit was no different as it came about based on an unmet clinical need for the use of a rectal swab in pediatrics. COPAN prides itself on creating products that specifically meet the needs of those who use them. With the new Rectal FecalSwab®, sample collection can go the way you want it to.