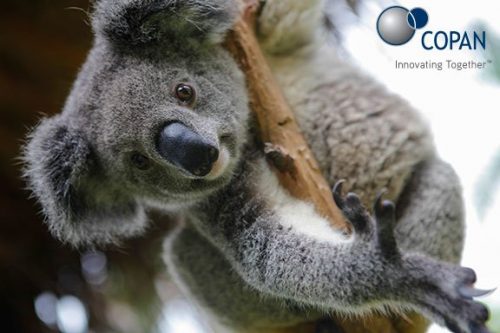 Australia is home to many iconic species of wildlife, including Koalas! The country has been doing its best to combat an outbreak that has been fatally exposing many of Australia’s beloved koalas to a species of Chlamydia, specifically C. pecorum. The most recent in a series of studies entitled, Antibody and Cytokine Responses of Koalas Vaccinated with Recombinant Chlamydial Major Outer Membrane Protein (MOMP) with Two Different Adjuvants, used COPAN’s cotton tipped swabs and compares two potential vaccinations to help protect their marsupial friends.

Previous studies found that a Recombinant Major Outer Membrane Protein (rMOMP) in combination with an Immune Stimulating Complex (ISC) adjuvant offers the koalas a strong immunity from the disease. However, it requires two or three doses. Wild koalas would either need to be tracked and recaptured, or remain captive for up to six months. This is not only costly and requires a lot of resources, but also causes a lot of stress for the animal. While looking to develop an alternative solution, researchers created a single dose rMOMP that utilizes a trivalent adjuvant, or Tri-Adj, which includes polyphosphazine and host defense peptides.

In order to compare the immune responses from both vaccinations, two sub-sets were chosen from roughly 400 “clinically healthy” koalas in South East Queensland to be studied. One group was vaccinated with the rMOMP mixed with the Tri-Adj and the other with the rMOMP mixed with the ISC. Those vaccinated with the ISC, were re-captured and given their 2nd and 3rd doses at one month intervals. By utilizing COPAN’s aluminum shafted cotton-tipped swabs, the researchers sampled the koalas three times; once prior to receiving the vaccination, and then again at second and sixth month period after vaccination.

Cited within the study, the researchers’ previous work found that an IFN-γ response is ideal for protection against the infection, as well as the IL-17A cytokine. All-in-all, the Tri-Adj and the ISC were comparable in their immune response, proving the single dose Tri-Adj to be an effective alternative to the 2-3 dose ISC. However, Khan et al were careful to point out that only the ISC has been proven to keep high levels of the antibody present for up to 8 years. More research on the longevity of the Tri-adj response is required in order to refer it as a true alternative.

In the meantime, COPAN is pleased to provide more cotton-tipped swabs to all species and we look forward to the next study in the Koala Chlamydial vaccine series.