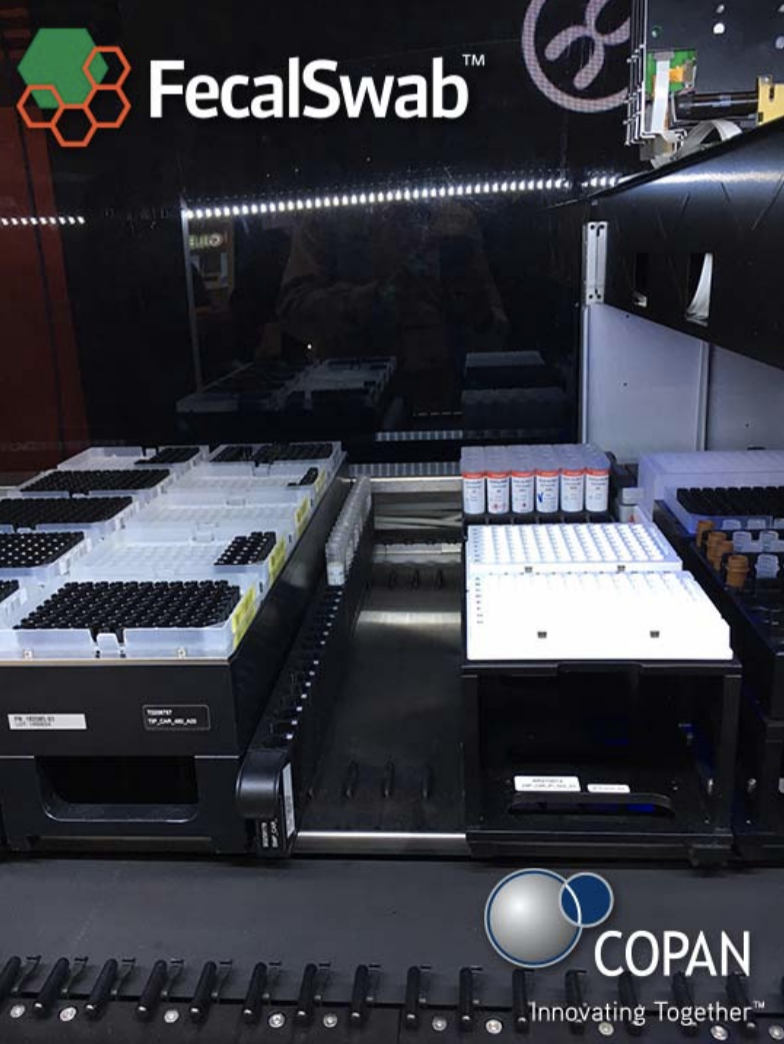 When you got it, flaunt it. It appears the use of FecalSwab™ is popping up everywhere. A brand-new study presented at 27th European Congress of Clinical Microbiology and Infectious Diseases (ECCMID) in Vienna, Austria examined the use of FecalSwab™ for yet another major molecular diagnostic platform, the Seegene Allplex gastrointestinal multiplex PCR.

In this study, Rebbapragada et al examined FecalSwab’s compatibility with the Seegene’s molecular chemistry, and FecalSwab’s convenience and utility when used with an automated pipetting platform employed within the assay. The study showed FecalSwab’s improved limit of detection when compared to traditional enteric transport media.

Traditionally, detecting pathogens in stool happens in one of two ways. Microscopy is an option, which can be troublesome as that it is both subjective and requires a high amount of expertise from the technologist. The other method is culture based identification of bacterial pathogens, which involves plating the specimen for growth on various selective media, followed by additional biochemical/phenotypic testing for confirmation.

Therefore, in a situation where one needs a quick and reliable identification, resources are either limited or confirmation requires extra time. Dynacare Microbiology Laboratories are a high-volume laboratory located in Ontario, Canada that receives over 200 specimens a day that call for enteric diagnosis. As is the case with most laboratories with high volumes, finding an “accurate diagnostic method with efficient workflow” becomes a high priority.

Thus, Seegene’s Allplex Gastrointestinal Multiplex PCR and FecalSwab™ were investigated as an option for fast results to enteric investigations and efficient workflow.

The overall process for using FecalSwab™ with the Seegene Allplex gastrointestinal multiplex PCR is simple. Collect using the FLOQSwab™ included in the FecalSwab™ kit by slightly dipping it into the stool sample, like a probe and loading it into the tube, careful not to overfill past the marked “max fill” line indicated on the tube. Mash and mix the stool until the sample appears homogenous and recap the tube. Once ready, uncap the fecal transport kit tubes and place directly onto the liquid handling platforms in the lab, from there the system does DNA extraction and handles the Master mix preparation. The fully prepared Seegene assay plate is then transferred to real-time thermocycler for analysis. It is important to note that in this study FecalSwab was used in conjunction with two different liquid handling platforms, due to their use in the lab at Dynacare, and include the Hamilton STARLet and the Hamilton Nimbus.

Among some of the key benefits they observed by using COPAN’s FecalSwab is that it demonstrated an improved limit of detection for both culture and molecular testing!

In addition, with the ability to test for both parasites and bacteria from a single sample, not only were the transportation and pre-analytical processes streamlined, but the analytical sensitivity was also enhanced. The optimized design and Cary-Blair formulation of FecalSwab™ allows for traditional reflex bacteriological culture, antibiotic susceptibility and epidemiological typing. Whether its automated liquid handling platforms or molecular assays for enteric pathogens for bacteria, viruses or parasites, FecalSwab™ outperforms traditional enteric transport media.

The successful examination of COPAN’s FecalSwab™ and its compatible use with yet another gastrointestinal multiplex PCR is testimonial not only to the integrity and versatility of the product, but also the widespread adoption of its use among clinicians, microbiologists and assay manufacturers alike. The reason for its success?

FecalSwab™ works. When there’s an opportunity for improvement, COPAN seizes it. Rather than waiting for someone else to create the solution, products are developed with excellence in mind, because at the end of every product there is a patient who not only deserves quality, but depends on it.

With a reputation for innovation, COPAN is a worldwide leader in the manufacturing of collection and transport systems. Copan’s collaborative approach to preanalytics has resulted in Flocked Swabs, ESwab, Universal Transport Medium and laboratory automation, WASP® and WASPLab™. COPAN’s collection and systems have been proven to advance the quality of traditional and contemporary microbiology assays. COPAN’s automation includes specimen processing, smart incubation, digital imaging, and strong algorithms for automatic segregation of bacterial cultures, followed by automated colony picking. COPAN carries a wide range of environmental sampling products for the food, beverage, hospital and pharmaceutical industries. For more information, visit https://www.copanusa.com/