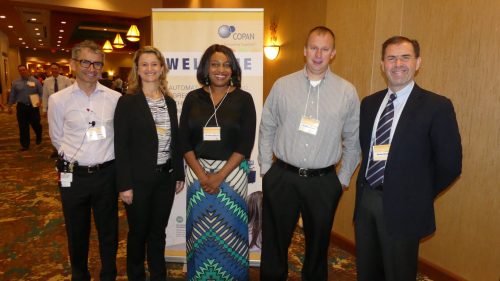 COPAN Diagnostics, Inc. (Murrieta, CA) and TriCore Reference Laboratories (Albuquerque, NM) met with a group of Microbiologists from leading laboratories to discuss why Liquid Based Microbiology, lab automation, and coordinated care are influential to the future of healthcare.

The Albuquerque-based event “Automatic Reading and Segregation of Cultures: The Value Proposition and Improved Time to Resulting Has Arrived,” was followed by a tour of the WASPLab™ system installed at TriCore Reference Laboratories (TriCore). In order to understand the evolution of microbiology automation, Dr. Suzane Silbert, the Clinical Scientist of Esoteric Testing Lab and Pathology at Tampa General Hospital (Tampa General), explained the history of Liquid Based Microbiology (LBM) and its role in clinical microbiology.

The move to automation in clinical microbiology was initially very challenging. Unlike Chemistry and Hematology, Microbiology involves a diversity of specimen types, making it difficult to manufacture a system that could process them all. Microbiology encounters a variety of specimens with different viscosities, and in addition were being received in different size and shape containers. COPAN’s Liquid Based Microbiology (LBM) approach, facilitates the standardization of collection and transport systems, specifically ESwab™ , SnotBuster™ , and FecalSwab . Dr. Silbert and her team at Tampa General have conducted and published many studies that confirm the effectiveness of LBM for collection and transport. At a large medical facility like Tampa General, standardizing on products like ESwab ™ dramatically streamlined workflow and brought efficiencies and savings for the lab and the hospital.

COPAN’s ESwab ™ is first in its class to convert swabs into liquid phase, consolidating the collection and transport for different specimen collection sites, for different bacterial investigations. ESwab™, contains 1 mL of liquid Amies and a regular flocked swab (FLOQSwabs ™). ESwabTM maintains the viability of aerobic, anaerobic, and fastidious bacteria for up to 48 hours at room and or refrigerator temperature. ESwab ™ is also available with minitip applicators for pediatric, ENT and urogenital sample collection.

Dr. Silbert also examined the use of SnotBuster ™ for sputum. She confirmed that “SL solution (SnotBuster ™ ) using the Copan Sputum Dipper is an efficient way to liquefy sputum.” She noted that, “specimens treated with SL solution, when plated, produced consistent and reproducible results.” She went on to say that “in most cases, recovery rates of microorganism growth were higher and superior after processing the sputum with SL solution.” With SnotBuster™ , the sputum is liquefied in instrument ready tubes, standardized for the use of automation.

FecalSwab ™, the third addition to the LBM family, simplifies both fecal sample collection and rectal swabbing, transport, and processing, by converting solid or semi-solid specimens into liquid phase. By transforming fecal samples into liquid, automation is now able to easily process fecal material. Dr. Silbert presented the findings of her and her team that showed that FecalSwab ™ works as well as traditional Cary-Blair medium for stool sample preservation and molecular enteric testing!

Dr. Nathan Ledeboer, Associate Professor of Pathology at the Medical College of Wisconsin and Medical Director, Microbiology and Molecular Diagnostics, Dynacare Laboratories and Froedtert Hospital, to spoke about the benefits and sophistication of algorithms that set COPAN’s WASPLab ™ automation apart from the competition.

Dr. Ledeboer’s discussion took a deeper look at automation, examining its drivers and benefits. He began his talk by addressing the diminishing workforce, as many with expertise are retiring, and not as many graduate programs are producing new microbiology technologists. Laboratories are responding to the challenges of a shrinking workforce, policy changes, and adjustments to the reimbursement plans by consolidation. Often times, laboratories are expected to do more with less. Dr. Ledeboer explains how implementing WASPLab ™ facilitates a laboratory’s ability to redirect their skilled workers to the tasks that require expertise. By reallocating tasks, a lab can eliminate some ergonomic injuries that may result from repetitive stress and improve overall employee satisfaction.

Dr. Ledeboer presented data on the reading segregation software and reading algorithms, a technology currently unmatched in the market. WASPLab™ system’s segregation software or image analysis, aids the Medical Technologist, by comparing 0 hour images with the images of plates at user-defined intervals. Differential image analysis works by subtracting any artifact already present on the plate from anything new growth detected at the pre-determined time interval. By using algorithms, WASPLab ™ is able to differentiate growth from no growth and automatically segregate the plates for the Medical Technologist. With a simple click of a button, the Medical Technologist can automatically discard any “no growths,” and focus on samples that need attention.

The second study, titled “Automatic Digital Analysis of Chromogenic Media for Vancomycin-Resistant-Enterococcus Screens Using Copan WASPLab™,” was similar in that it used chromogenic media andwas a collaboration between several laboratories. This study comprised of an enormous 104,730 patient samples. WASPLab™ had 100% sensitivity and 89.5% specificity. Similar to the last study, an additional 498 plates were scored positive, that had been missed by manual reading and upon second evaluation, found the automation was correct.

Dr. Karissa Culbreath, the Scientific Director and Infectious Disease Assistant Professor for the Department of Pathology at TriCore Reference Laboratories, discussed TriCore’s experience with WASPLab™. Culbreath presented the direct effects that have resulted since implementation. Tricore reports has decreased the time to process urines from 19 hours, to 8.5 hours. Culbreath noted that theWASP® significantly shortens the time from specimen received to specimen planted while WASPLab™ reduces the time to final report for pure cultures

As illustrated by both, Dr. Culbreath and TriCore’s CEO Mr. Khosrow Shotorbani, the benefits of providing physicians with timely and actionable results can positively impact patient outcomes, optimize resources, and potentially reduce the propagation of antibiotic resistant bacteria. The advances in technology will facilitate the laboratory’s move from a volume based approach to a value based approach in concert with the National Action Plan for Combating Antibiotic Resistance, a strategic plan against antibiotic resistance, that was published by the White House in March of 2015.

Norman Sharples, CEO of COPAN Diagnostics closed the event stating, “this technology has the potential to increase the relevance of the laboratory in the course of a patient’s treatment. By having a database, which provides cross communications between facilities, different laboratories can talk to each other and receive a more comprehensive snapshot of the patient’s history. This is huge for improving patient diagnosis and outcome. By positioning laboratories as information centers, automation isn’t just about automating processes, it is about providing faster results within the therapeutic window that can lead to improved patient care.”

With a reputation for innovation, Copan is the leading manufacturer of collection and transport systems in the world. Copan’s collaborative approach to preanalytics has resulted in FLOQSwabTM Flocked Swabs ESwabTM, UTMTM Universal Transport Medium and laboratory automation, WASP® and WASPLabTM. Copan carries a range of microbial sampling products, inoculation loops, and pipettes. For more information, visit www.copanusa.com