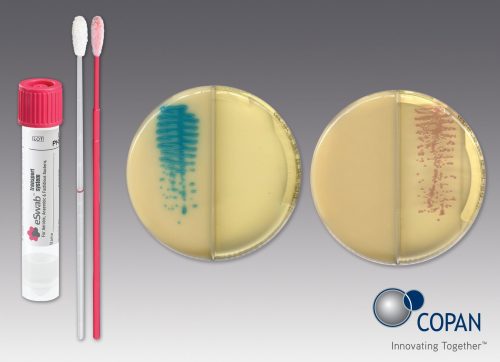 The more likely scenario of doomsday will arrive in a much smaller package. Superbugs, such as Methicillin Resistant Staphylococcus Aureus (MRSA) and Vancomycin Resistant Enterococci (VRE) are getting stronger and tougher to beat. But there’s good news.

“Early identification of methicillin resistant Staphylococcus aureus (MRSA) and Vancomycin resistant enterococci (VRE) in colonized patients from surveillance cultures results in a reduction of colonization, infection and subsequent morbidity and mortality” stated Gaskin et al. in a recent study presented at the 27th European Congress of Clinical Microbiology and Infectious Diseases in Vienna, Austria in April titled “Implementation of Colorex™ MRSA/VRE bi -plate on WASP™/WASPLab® to Screen for MRSA and VRE using the ESwab™ Duo Swab”.

A Unique Study: Half and Half is a Whole Lot More Efficient

Hospital-Acquired Infections are growing. Early detection of these highly contagious superbugs is crucial since it will reduce the spread of the infections, and therefore decrease the length of hospital stays and the overall financial burden on the healthcare industry.

Using ESwab™ duo swab kits, 359 clinical MRSA and VRE specimens were collected and processed using Hamilton’s current method with MRSA Select II and VRE CHROMagar with a 30uL inoculum on the WASPLab®. A new procedure was then tested with those same specimens on COPAN’s WASP™ with a 1uL dual loop and a twin loop bi-plate two streaking pattern.

An additional 95 specimens were run on COPAN’s specimen processor using a 10µL loop with a vertical bi-plate. Once processed, all the plates were incubated for 20 hours and digital imaging analysis was performed using COPAN’s unique algorithms.

COPAN’s dual ESwab™ is a single-use device consisting of one tube filled with 1mL of Liquid Amies medium and two regular size flocked swabs: a pink one and a white one. The color-coded swabs make this product easy to use and enable physicians and nurses to easily pool multiple sample sites from the same patient. This ESwab™ kit (catalog number 493C02) can be used for effective antibiotic resistant organism swab collection.

The study found that “in the 95 specimens tested using the 10µl loop on a bi-plate, 76 were positive for MRSA and 26 were positive for VRE showing 100% specificity and sensitivity” with the current method of planting 30µ from 2 different patient samples, onto 2 different full plates. In laboratories with a high volume of surveillance cultures, being able to pool patient samples and reduce the number of culture plates in half is ingenious and efficient.

The Heroes in Lab Coats

If bioterrorism reached our shores, detecting and accurately identifying the threat would lie on the shoulders of the clinical Microbiology community. Border walls and even the expansive ocean are not enough to defend us against superbugs. These hardy pathogens are moving across continents and can potentially infect anyone, particularly the most vulnerable among us.

In addition, as the workflow increases amidst tightened budgets, a serious labor shortage exists. There is a dramatic decline in the pool of skilled laboratory workers and the average medical technologist is approaching retirement age.

Faced with the reality of these threats, labs are looking for more streamlined, cost-effective ways to process the influx of samples. The Hamilton Microbiology Laboratory currently processes more than 100,000 MRSA and VRE samples annually. This study revealed that streaking time was reduced by 60 percent, when using COPAN’s automated system to process samples on a bi-plate instead of 2 separate plates.

Further, the team of researchers discovered that using the ESwab duo swabs in conjunction with the bi-plates reduced the number of specimens and plates by half, therefore doubling the space capacity. This reduction in both streak time and image analysis will increase the efficiency of the entire WASP™ and WASPLab® system.

And that’s something that should cause those superbugs to shiver in their bacteria-laden boots.