Can Bacteria be Stored in Freezing Temperatures Using ESwab™? 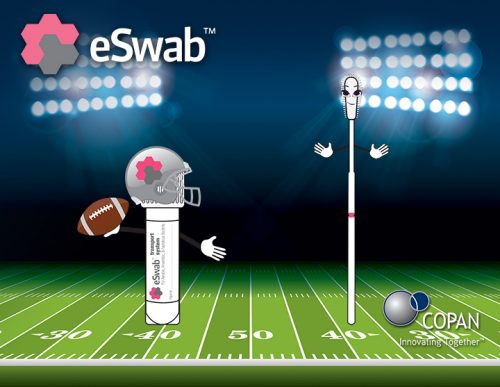 While we prepare to watch Super Bowl LII, Minnesota prepares to host the coldest Super Bowl on record with a bone chilling cold snap brought in from the Rockies. Below zero temperatures isn’t exactly a topic many gamegoers want to labor over. Yet for Microbiologists, whether clinical specimens can be stored long-term at -20°C and -80°C in the icy depths of the laboratory freezer, is a hot topic.

COPAN put its Liquid Amies to the test to find out. And the results? The universal collection and transport device, with 20% added Glycerol, will keep bacterial strains intact even after spending a year in the freezer.

COPAN’s test kitchen went into full swing to assess the Liquid Based Microbiology device’s freezing capacity. After receiving many requests from Microbiologists for a collection and storage device that enables them to freeze the specimen in the original tube and still successfully culture the bacteria after long-term storage, the researchers set out to evaluate the performance of ESwab’s Liquid Amies medium plus 20 percent glycerol. The results were presented as a poster titled “A New Amies Medium +20% Glycerol Device for the Collection and Long Term Frozen Storage of Clinical Specimens for Bacteria Culture” during ASM Microbe.

Recognizing that “monitoring bacteria load during infection or changes in bacterial pathogens in response to vaccinations and antibiotics has become crucial to microbiology” the team used a panel of ATCC bacteria strains and looked at how well ESwab™ isolated the bacteria after spending a year at -20ºC and -80ºC.

When conducting clinical and research studies, investigators need to be able to store samples long term for retesting under the original conditions of the study. How to freeze specimens using ESwab™ to perform bacterial cultures under the original conditions for all samples collected is a commonly asked question for COPAN. So, COPAN decided to test out the theory. The results were published and presented during the American Society for Microbiology (ASM) in 2016.

After diluting the bacteria with 0.5McF of fresh cultures for each bacteria strain, the team prepared two dilutions, one with countable CFUs (200-500/100uL) and another with uncountable CFUs. This was done to see if they could easily isolate the bacteria.

The Liquid Amies plus 20 percent glycerol media was then inoculated with 100mL of each dilution per strain. A total of 24 tubes (two sets of 12) were prepared for each bacteria and dilution. After inoculating each sample with different bacteria, it was plated using both manual and automatic methods. The automated portion was completed with COPAN’s WASP®DT. Every month, 10ul was taken from each tube and tested to measure stability.

If all this subzero talk has you shivering, grab a coat, and turn up the heat, but don’t stop reading. During the yearlong experiment, not one bit of bacteria loss was recorded. That means that the quick and easy step of adding 20 percent glycerol to ESwab™ can make frozen specimen storage completely reliable and help further clinical and research studies. Want to try out ESwab™? Contact us today for free samples.