The Art of Flocked Swabs 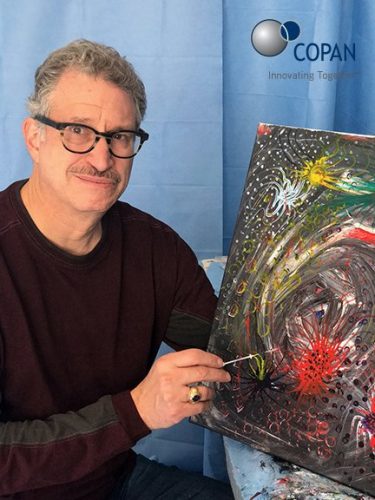 Photo features Dr. Jacob A. Neufeld with one of his latest flocked swab paintings.

What Would Kandinsky or Pollock Have Done Had They Had a FLOQSwab®?

It might sound unusual, but as one artist recently discovered, the nylon tip of COPAN’s innovative flocked swab isn’t just a tool for the clinical world. Dr. Jacob A. Neufeld, the Medical Director-Pediatric Rehabilitation at St. Luke’s Children’s Hospital, is the inspired artist using medical devices to create his contemporary abstract paintings.

Dr. Neufeld aka “Dr. J” first became inspired two years ago when he attended First Thursday in Boise, Idaho. First Thursday is an art event held the first Thursday of every month for artists to showcase their work. It was there that he got the idea from a splatter painting that was on display. Though he had never painted before, he thought syringes and needles would be able to achieve the same desired effect. The very next night, Dr. J went to the Boise Creative Center to paint and has been experimenting with different medical devices each week.

COPAN’s patented flocked swabs (FLOQSwabs®) have gained a reputation for being the best method for collecting biological specimens, particularly when it comes to sample uptake and release. FLOQSwabs® are novel solutions for the advancement of the pre-analytical phase of Microbiology and the utilization has expanded to several different industries, including environmental, clinical, and forensic. Yet, art was one application that had not been considered! Recently, Dr. J received a donation of several flocked swabs to apply to his artwork. He immediately loved the effect the swabs created!

When he posted photos of his paintings done using our flocked swab as a brush on Facebook, he was surprised at the amount of positive feedback he received, more so than any of the other artwork he posted. With the use of color and textual application from the flocked swab, some people have even compared his paintings to Jackson Pollock, an avant-garde artist recognized for his unique style.

Aside from applying the primer gesso, a paintbrush never touches his canvas. Some other medical products he has used include: blood gas needle, neonatal percutaneous needle, operating room tools, and scrub sponges for the background! When asked what he enjoyed about using the flocked swab for his art, he said simply “it’s a great paintbrush!” It’s hard to argue with that! At COPAN, we understand how sometimes inspiration can come out of the most unlikely sources.

To see more of Dr. J’s paintings check him out on Facebook here. (Be sure you are logged in for the link to work properly)