The Spooky Microbe Monsters Among Us 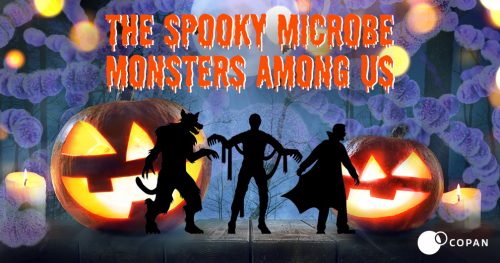 It’s nearly Halloween, a time to celebrate by donning costumes, carving pumpkins, and watching horror films. The Fall Season is a perfect time to gather around a warm fire and tell spooky stories about our favorite monsters. Although monsters like vampires, werewolves, zombies, and mummies don’t really exist, there remain some species in the microbial world that bear striking similarities with our popular fictional baddies.

Vampire Microbes Out for Blood

Most bacteria and fictional vampires share the aversion to sunlight. Bacteria do not survive well when exposed to UV light, a key component of sunlight. The UV light is so deadly to microbes that many labs use UV light to sterilize work areas and equipment.

Some bacteria, like Streptococcus pyogenes, have an unquenchable thirst for blood.  S. pyogenes is a bacterium that attacks red blood cells and causes infections, such as pharyngitis or strep throat and scarlet fever. Like the vampires in fiction, these blood eating bacteria need to be careful to avoid discovery.

The process of breaking down blood cells requires special molecules that don’t feature in human cells. These molecules stick out as a prime target for the immune system to identify the vampiric bacteria and send a mob of white blood cells with pitchforks. This is why bacteria tend to only digest blood when they are running particularly low on iron under the cover of darkness.

Werewolves are perfectly normal people who suddenly turn into horrifying monsters when the full moon rises. Like werewolves, many bacteria are usually friendly to us until the wrong conditions arise.Streptococcus pneumoniae bacteria (aka pneumococcus) can camp out happily and harmlessly for months at a time in the nose and throats of humans, then abruptly turn on their hosts, causing earaches, meningitis, and pneumonia.

Scientists found that increasing the colony’s temperature (mimicking the fever of flu) or adding the stress-linked hormone norepinephrine caused some of the microbes to abruptly break off from the community and become a far more virulent menace to the body.

Bacteria and werewolves also share the same weakness, the silver bullet. Silver has been used as an antimicrobial agent for centuries because bacteria readily absorb toxic silver particles. This is especially useful today because, unlike common pill-form antibiotics, bacteria cannot develop a resistance to silver.

Using silver, chemists in Israel have discovered the walking dead of the microbial world. In the experiment, researchers exposed Pseudomonas aeruginosa to silver nitrate, killing the bacteria.  The dead bacteria were then introduced to a solution of living P. aeruginosa, and the undead bacteria released their silver, unleashing a microbial massacre and spreading the effect to other microbes. So, like a zombie outbreak, it turns out that bacteria killed by silver can spread contagious death to nearby living pathogens even after they are long dead.

Mummy Microbes Back From the Dead

Like a mummy come to life from the ancient past, an 8-million-year-old bacterium has been brought back from the dead. Kay Bidle of Rutgers University in New Jersey, US, and his colleagues extracted DNA and bacteria from ice found between 3 and 5 meters beneath the surface of a glacier in Antarctica. They then attempted to resuscitate the organisms and found they could plate them and isolate colonies.

Like the mummies from the movies, the ravages of time does take its toll. Whereas the younger 100,000 year-old ice, contained a variety of microorganisms, the researchers found only one type of viable bacterium in an 8-million-year-old sample. It also grew in the laboratory but much more slowly due to DNA damage from the ravages of time.

Remember that most microbes are harmless or even friendly to us, but there remain several species out there, like those above, that continue to haunt us. Luckily, at COPAN, we are in the business of better sample collection, preservation and transport for analysis of such menacing microbes with innovative products like ESwab™, FecalSwab™, and UriSponge™. We hope you enjoy yourself no matter how you choose to spend this Halloween. Have fun, be safe, and wash your hands!