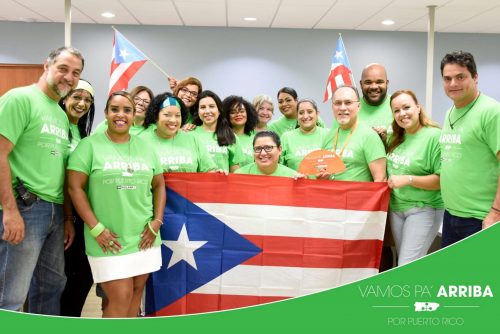 With hashtags like #VamoArribaPR and #VamosPaArribaPorPuertoRico, residents of this island, including our longtime distributor Bio-Nuclear, Inc, are Tweeting, Facebooking and Instagramming to announce to the world that “Puerto Rico will rise above” the devastation brought upon their home by Hurricane Maria.

The Category 4 hurricane slammed in to the U.S. territory on Sept. 20, knocking down power lines, destroying homes and killing more than 50 individuals. Yet, even with the Boricuas’ optimistic hashtags, reconstruction efforts are lagging.

In the wake of the hurricane, Bio-Nuclear, Inc. has been posting updates about the efforts to help locals on its Facebook page. They’ve posted tips from a psychologist on how to deal with all the emotional trauma caused by Maria, how to prevent the spread of mosquito-borne diseases such as Zika, dengue and chikungunya and invited everyone to add positive messages.

“Puerto Rico hasn’t had a hurricane of this category for more than 80 years, so basically nobody knew what was coming,” said Barbara LaLuz, COPAN’s production manager and a Puerto Rican native. “I experienced two hurricanes of strong magnitude (but not like Maria), and we were without power or water for a month max.”

That’s not the case with Maria. After the hurricane hit, the entire island went dark, causing the largest blackout in American history. Initially, 1.6 million residents had no power and although a month has passed, a total of 1.2 million or 75 percent of residents, have yet to see their lights turn on. Officials originally had hoped to have the power restored by mid-December, but they’re now saying that fixing the power grid could take up to six months. In addition, only 25 percent of the island currently has running water.

Barbara’s parents are among the lucky few who have water off and on, although they have no electricity and portions of their home were damaged and flooded. Many of her friends and family members lost their homes during the destruction.

“My aunt’s house is in the mountains and got flooded because they live near a river. My best friend called me crying because she hasn’t been able to work (and) that breaks my heart. A lot of places are closed or are not able to open for business and that’s why as of today more than 40,000 people have emigrated to the United States. Hospitals have been closing because the generators can only work so long or they got too damaged. I think since Maria happened my heart is even more in Puerto Rico. I just pray things can get better soon” added Barbara.

COPAN Diagnostics and its employees helped by donating everything from diapers and batteries to canned food and hand sanitizer and are shipping them to Puerto Rico. Barbara’s mother is taking all the items to a local church and they will be distributed to people in need.

“After the passage of Hurricane Maria on our island, many have been affected,” Bio-Nuclear, Inc. posted on October 18. “But let’s not let this take away our desire to keep growing and help rebuild a better Puerto Rico. Bio-Nuclear, Inc. wants you to be part of the initiative #vamospaarribaporpuertorico. Comment on what you’re doing for our beautiful island.”

To donate to the reconstruction efforts please visit Voices for Puerto Rico.