The diagnosis of bloodstream infections (BSIs) is one of the most critical functions of clinical microbiology laboratories. Among the bundles of the Surviving Sepsis Campaign under “Diagnosis” is stated to take at least 2 sets of blood culture before antimicrobial therapy. Clinicians expect to be notified by the laboratory every time a blood culture becomes positive which it may represent life-threatening infections. It is an important duty of the microbiologist to optimize the workflow around this sample with the aim of providing the results (Gram up to antimicrobial susceptibility testing AST) in the shortest time as possible. 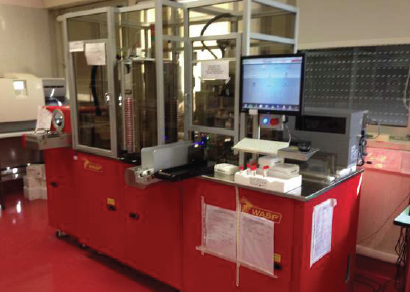 Since 2008 we have implemented a new work flow by introducing the WASP automation for processing clinical specimens. All laboratory protocols have been gradually improved along the time. Recently we decide to also process positive BCs on the WASP in order to reduce the manual work and to improve the quality of our work.

Objectives:
-Implement a WASP protocol for the preparation of Gram smears and culture set up for all positive BC bottles;
-Compare manual to WASP automation processing of positive BCs.
Results: The number of mono-microbial and mixed BCs are reported in the table 1 Microscopic examination; Good agreement between Manual and Automated smears was observed. Some manual smears are usually overlaoded and the microscopic observation can be challenging particularly in
mixed BCs observation (figure 1) Culture: plates seeded by WASP had well isolated colonies and usually did not require a subculture. Indeed, 6 mixed BCs from manual seeding required a subculture
onto specific selective media. 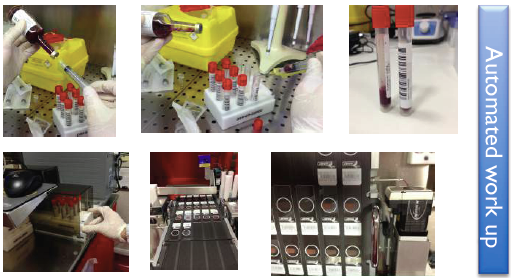 Methods
93 Sets (186 bottles) of BacT/ALERT FA FAN® Aerobic and BacT/ALERT FN FAN Anaerobic (bioMerièux) BC positive bottles were used for this comparison. 196 bottles were tested with both manual and WASP automated methods for smear preparation as well as for agar plate’s seeding.

MICROSCOPIC EXAMINATION: Two sets of slides were prepared from each Positive BC, for both manual and automated smear and stained using the PREVI color Gram stainer (bioMerièux) CULTURE: Positive BC were cultured on Chocholate agar (three plates for each BC; and incubated under aerobic, microaerobic and anaerobic condition at 35 ± 2°C)

For the manual method, two drops of blood culture were used (to inoculate each agar plate) While one drop of BC was used to prepare manual smears A 2ml aliquot of each positive BC bottle was transferred into a sterile tube, barcoded and loaded on the WASP and using a specific protocol, using a 10 μl loop, inoculates 3 agar plates with a 5 quadrant streaking pattern and prepares two slides with a vertical smear in the middle of a 20mm well on the surface of the glass slide.

Conclusion:
An automated work protocol has a clear impact on quality and traceability. The same barcode, associated to the plates and to the slides, allows traceability of each BCs and avoiding misidentification of slides The introduction of BCs on WASP has significantly reduced manual work, has improved the quality of of BCs streaking, and globally reduced the time to reporting. In fact, well isolated colonies avoid sub-culture from mixed blood. An additional advantage is that you can use the same tube to perform any additional assay: from MALDI TOF direct identification to any additional molecular assay test (Film Array as well as Real time PCR to confirm the presence carbapenemase producer (eg. Carbapenemases Producing Enterobacteria CPE) Take home message is “improved the quality of your work and save the time for faster results”

Automation in the Clinical Microbiology Laboratory