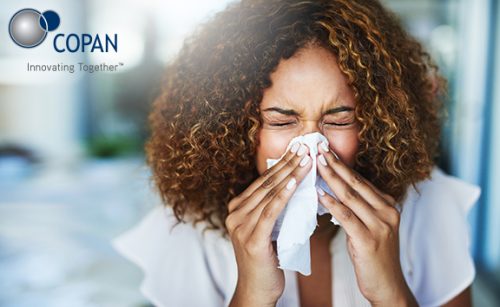 The 2017 – 2018 Influenza season was one of the longest and most severe seasons since 2009. While it started slowly in November, it all came to a head toward the end of December and remained high until the end of March. Though many planned for a busy flu season, across the board is was underestimated. According to the CDC, the percentage of influenza-like illness activity including: outpatient clinic and emergency department visits, and influenza-related hospitalization rates, reached a peak at 7.5%, the highest since 2009 which had topped at 7.7%.

Several causes contributed to the severity of the 2017-2018 influenza season including: an especially prevalent strain (H3N2), decreased vaccine effectiveness which resulted in more total infections and more hospitalizations, as well as the emergence of an additional flu strain, H1N1. As a result, there was a struggle to keep up with the demand of collection and transport materials like UTM®, FLOQSwabs®, and assay kits in microbiology laboratories. Significant weather events also put a strain on deliveries of critical products. To avoid another catastrophic season there are measures laboratories can take.

US and European experts are closely monitoring Australia’s influenza season which typically gives some indicators of what’s to come. They are surveilling to see which strain is circulating and the effectiveness of its corresponding vaccine. This will help to predict which strain will likely be dominant in the United States and Europe and in preparing the appropriate vaccination.  But vaccination is only one piece of the puzzle.

COPAN’s Scientific Director – Dr. Susan Sharp weighed in on the subject and had this to say “Indications seem to point that we may not see as severe a season as the previous year but, testing sites should now be discussing with their clinicians regarding what type of patient should get what typed of testing.  For example, limiting molecular testing to ICU and emergency room patients, providing rapid antigen testing for influenza and RSV infections, triaging which patients will get molecular influenza, RSV or a full molecular panel of respiratory virus testing, etc.” In terms of advice for this year, Dr. Sharp added “Planning for a significant influenza season is always the best preparation.”

1. Proper Specimen and Collection Tools
Prior to any testing, it is vital that hospitals, laboratories and clinicians are armed with the proper tools for influenza specimen collection. COPAN’s UTM® Universal Transport Media, is a room temperature stable viral transport medium for collection, transport, maintenance and long-term freeze storage of Viruses, such as Influenza. UTM® comes paired with a COPAN FLOQSwab® which has fiber strands that facilitate strong hydraulic uptake of liquid sample, while the sample stays close to the surface allowing fast elution. The higher release of sample and the superior viability maintenance with UTM® makes this collection and transport system a favorite amongst microbiology community. To read more on the superior performance of UTM® paired with a FLOQSwab® click here. In addition, to read more on UTM® specimen collection click here.

2. Proper Specimen Collection
Even the best tools require proper technique. It is vital that clinicians, nurses, physicians and anyone else performing the specimen collection is educated on the proper techniques for specimen collection. Stewardship Committee members can assist microbiology by educating nurses on details such as testing within three days of the onset of the symptoms, as well as being sure to insert the swab into posterior pharynx and tonsillar areas. From there the specimen should be stored at 4 degrees Celsius and sent for testing or immediately tested at the point of care. For a video guide on how to collect using FLOQSwabs® click here.

4. Advocate Vaccination
Vaccination is still one of the best methods of prevention. Encouraging the vaccination of both children and the elderly will keep mortality rates low. The American Society for Microbiology reports that even a particularly ineffective vaccine can still decrease the length and severity of symptoms. To read more about vaccination to lessen flu symptoms click here.

To learn more about last year’s flu season and what can be learned from it, click the link for to listen and view the full webinar, originally posted by CAP today on August 22, 2018.

By considering these different lessons that were learned after the 2017-2018 influenza season, everyone can be better prepared to avoid another record breaking flu season. Remember to wash your hands, get vaccinated and stay safe and healthy.