ESwab is Great for Eight 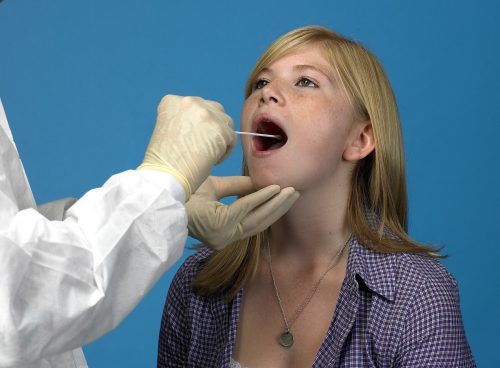 What can 1mL of liquid amies and a COPAN flocked swab offer clinical investigations? Hint* the answer rhymes with great.

A new study, published in the Journal of Clinical Microbiology, titled Prevalence of Fusobacterium necrophorum in Children Presenting with Pharyngitis[i] set out to determine the frequency and age associated with F. necrophorum and groups A and C/G streptococci as causes of bacterial pharyngitis in children.

While conducting the study, researchers completed eight different investigations with just one specimen in an ESwab (Copan Diagnostics, Murrieta, CA). The study was conducted at the prestigious Children’s Hospital Los Angeles, in Los Angeles, California. It notes that “[o]nly one sample per patient was enrolled in the study,” which is incredible considering the number of tests performed from the same sample!

Background:
Fusobacterium necrophorum is a Gram-negative obligate anaerobe that is linked to tonsillitis and Lemierre’s syndrome (a bacterial infection that develops after a strep sore throat has created a peritonsillar abscess). Practitioners began to a notice a trend among adolescent males experiencing symptoms of sore throats, followed by fever.

By conducting various studies, researchers found that the presence of F. necrophorum was increasing and becoming equally, if not more prevalent, than Group A Streptococcus (GAS) for adolescent males, mostly between fourteen and twenty years of age.  F. necrophorum is cause for concern, as it is associated with a higher rate of morbidity and mortality. Because of this, routine screening is becoming a common practice in Europe in hopes of early detection for improved patient care.

To detect the specific anaerobic bacteria, most institutions favor a selective media or perform molecular tests. While the media option can distinguish F. necrophorum, it takes two or more days to incubate. While the molecular method is faster, it requires the tools and skillset for a PCR test and comes at an additional cost.

Because F. necrophorum and Group A Streptococcus have similar symptoms, physicians may attempt to treat the infection empirically, which can sometimes cause complications. Instead, it is preferred to perform a PCR test, and back it up with a selective media culture, which typically would require multiple sample collections from the same patient: a collection with a sample device for the molecular assay, and a collection for traditional culture.

However, here is where COPAN’s elution swab can help! (The “E” on ESwab™ stands for elution.) ESwab™ maintains viability of aerobic, anaerobic, and fastidious bacteria and elutes the entire sample into the medium providing up to 10 identical aliquots of liquid sample suspension to perform multiple tests from the same specimen. Because of this feature, ESwab™ has been qualified by leading different leading assay platforms for their molecular and rapid antigen tests.

Testing began with Children’s Hospital of Los Angeles’ standard of care methods, which included an initial screening for Group A Strep in the Emergency Department, by Point-Of-Care RADT (Osom Ultra Strep A; Sekisui Diagnostics, San Diego, CA), followed by an automatic reflex to culture on blood agar for Group A Strep and Group C/G Streptococci.

Next pharyngeal samples collected in ESwab™ were stored at 4°C after processing using the standard-of-care testing, and F. necrophorum cultures were set up within 24h of collection. ESwab™ liquid medium was inoculated onto four selective and/or differential agar plates including: Egg Yolk Agar (EYA), Egg Yolk agar with Kanamycin and Vancomycin (EYKV), Egg Yolk Agar with Kanamycin, Vancomycin, and Josamycin (EYKVJ), and Fusobacterium selective agar (FSA).

The selective media, for example EYKVJ, is great for finding isolates because it suppresses most normal flora that would grow. Samples were then stored at -70 Celsius, and tested further through additional PCR testing for Group A Strep and Group C/G Streptococci (Lyra Direct Strep kit; Quidel Corporation, San Diego, CA) and F. necrophorum PCR.

This method took 300µl of ESwab™ samples (and added it to 2mL NucliSENS lysis buffer, and then incubated for a minimum of 20 minutes. Next, they were extracted and eluted in 30µl elution buffer on the NucliSENS easyMAG automated instrument (bioMérieux, Inc.,Durham, NC). That’s eight tests from ONE ESwab™ Sample! Here’s a recap of each testing method:

ESwab Can Do All That and Then Some

By using ESwab™, this study demonstrates its versatility for not only maintaining anaerobes, but also its ability to be used for multiple testing. Practitioners do not need to inconvenience the patient more than one time for one sample. Everything can be done with one sample, rather than having to collect multiple samples from the same patient.

In this case, the laboratory would have had to collect 8 different samples, with at least 4 different collection and transport kits from the sample patient to be able to do the same amount of testing. ESwab™ proves once again that the convenience, accuracy, and multipurpose utility of COPAN’s liquid amies kit is second to none.

The study concludes that the “data demonstrated a potential role for F. necrophorum as a pathogen of pharyngitis among young adults but suggests that prevalence of F. necrophorum is low in pre-adolescent patients.”