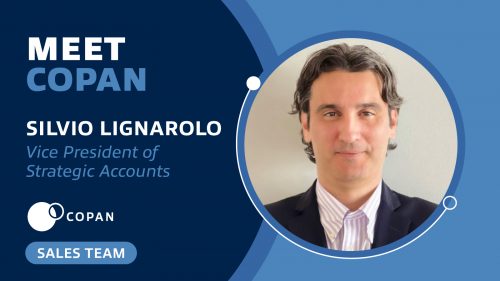 Silvio Lignarolo has been a part of the COPAN team for about 15 years — one of the longest tenures at COPAN. Silvio is an instrumental part of the fast-growing sales team and is mainly responsible for all business development and support for the independent, commercial lab sector known as ‘reference labs,’ which includes the nation’s largest labs, namely Quest Diagnostics and Labcorp. Silvio has managed automation and liquid based microbiology consumable business throughout his career, from the first single WASP® installations in Europe to the most extensive full lab automation installation to date at the Quest, Clifton, New Jersey location.

Born and raised in Torino, Italy, Silvio earned a degree in political science, where he met his future wife, Chiara. He then moved to the United States in 2004, where he attended Boston University, earning a second degree in International Marketing.

One common thread in Silvio’s career is that he has had the opportunity to work with smaller, early-stage startups that developed nascent technologies into thriving industries. He first worked at a startup that introduced LED lighting for retail use that Philips would later acquire. He also worked in the electronic payment industry for a startup that Verifone later acquired.

In 2008, Silvio answered an ad in an Italian Newspaper for work at COPAN, a small company that would create a new industry in the Microbiology field. Silvio met the late Daniele Trivia, COPAN Group’s Founder, and CEO. Silvio was immediately hired on as a business development manager for the COPAN’s WASP® instrument, which would have its debut launch just a few months later at the 2008 ECCMID meeting in Barcelona, Spain.

During his tenure at COPAN in Italy, Silvio worked in many positions, including management for accounts in France, Belgium, Holland, and the UK. He later moved to the United Arab Emirates in 2013 with Chiara to support projects in the Middle East and Africa. In 2015, Norman Sharples and Stefania Triva offered Silvio the opportunity of a lifetime, to move back to the United States to take a position with COPAN Diagnostics, and he has managed the reference laboratory market in North America ever since. He was recently promoted to VP of Strategic Accounts in recognition of his significant contributions over the past 6 years!

When asked about why he likes working for COPAN, Silvio said: “I love the creative and innovative spirit COPAN still maintains even as we grow.” He said, “COPAN is similar to a startup in many ways. COPAN allows you to develop your skills and be an ‘entrepreneur of yourself.’ The company empowers employees and allows them to be creative and take initiative when coming up with solutions to problems. I find you get the best out of people when they have ownership of their work.”

Currently, Silvio lives in San Diego, California, with his wife Chiara and 7-year-old son Leone. Leone enjoys baseball and is an active player on his little league team, and Chiara works as a remote journalist for Italian publications. When not working, Silvio and his family love outdoor activities like taking walks, going on hikes, and playing tennis.

Silvio has managed COPAN’s business with Quest Diagnostics, one of the largest medical testing laboratories. Just this year, Quest at the Clifton, NJ location has gone live with the most extensive COPAN automation installation to date. Clifton builds on the success of another earlier “Lab of the Future” project at Quest Diagnostics’ where a large-scale WASPLab® full lab automation line was installed in Marlborough, Massachusetts.

The Quest Marlborough install was a success, and leadership at Quest recognized COPAN’s full laboratory automation led to better testing quality and enhanced productivity. The automation was so positively impactful on their operations that Quest decided to expand their investment in Microbiology automation to other labs, including their flagship location in Clifton, NJ.

The Quest Clifton laboratory is the largest in the Quest Diagnostics’ network of more than 20 major laboratory facilities nationwide and employs more than 1,100 people. The Clifton location is Quest Diagnostics’ flagship laboratory and is designed to enhance the diagnostic information services it provides to over 40 million people in New Jersey, New York, Pennsylvania, Maryland, Virginia, West Virginia, Delaware, and the District of Columbia.

The sprawling 80 ft long full laboratory automation boasts a full complement of state-of-the-art COPAN laboratory Automation including WASPs®, WASPLab®Smart Incubators, WASP-FLOs®, and Colibris® equipped with PhenoMATRIX® advanced Artificial Intelligence. The laboratory is currently automatically processing and digitally resulting in a tremendous number of samples per day! Additional lines are also planned for installation at the same location this coming year, and it will increase the daily throughput.

When asked why this project was so successful, Silvio said, “Meticulous project planning and the dedication of the engineering and FAS teams were critical to the project’s success.”

It cannot be overstated how genuinely monumental this project was and how the installation could not have been done without our engineering and FAS teams’ hard work and technical prowess. Unfortunately, pandemic lockdowns and travel bans made it impossible for COPAN Italia engineering teams to travel to the United States to support the installation in person.

The US engineering team, led by Brandi Swartz, and the FAS team led by Marco Agliardi installed the equipment on the exact target date planned despite the technical challenges the pandemic had brought to the project. The automation then went through an extensive process of validation and configuration. After less than six months, the equipment went live on January 4th, 2021, and has continued operating ever since.

When asked what he learned from the project, Silvio said, “Trust in the technology and remember to treat every customer in a true spirit of partnership, and you will find success.”

COPAN is committed to innovation in pre-analytics. The automation and Artificial Intelligence (AI) algorithms developed by COPAN combine the unparalleled human intelligence of the Microbiology community, with the invaluable asset of AI to help laboratories amplify their resources to provide faster actionable results to clinicians.