A Little Dirt Won’t Hurt: Why Kids Need It 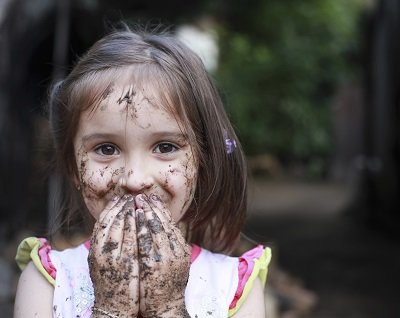 Pig-Pen’s mom was actually doing her son a favor. The perpetually-filthy Peanuts character may seem like an epic parenting fail, but the authors of a new book say dirt is as essential to children’s health as sunshine.

“In our classical training as microbiologists we studied only the microbes that cause diseases and the ways to kill them. Now we acknowledge that we have, for many years, ignored the vast majority of microbes that keep us healthy,” wrote B. Brett Finlay and Marie-Claire Arrieta in “Let Them Eat Dirt: Saving Your Child from an Oversanitized World.”

The authors go on to say that the modern day rush to slather every hand in antibacterial gel is preventing children from building up the blocks of a healthy immune system. Placing children in virtual sterile bubbles instead of exposing them to necessary microbes is causing an explosion in so-called developed country afflictions such as asthma, obesity, diabetes and allergies.

Finlay and Arrieta emphasize that parents don’t need to run around cleaning their children’s toys constantly. Sending children, particularly those 5 years old and younger, into the outdoors to dig around in the dirt and having pets lick their faces, will help them get those essential microbes.

They even write that when a pacifier is dropped on the floor, the parent should pick it up and place it in his or her mouth. Children should wash their hands after using the restroom and before eating, but that’s it.

Antibiotics are also a factor and may be effecting the way our digestive track processes natural bacteria. When antibiotics are too often prescribed, the body builds up immunities to the medication. Physicians have become aware of the dangers adherent in over-prescribing antibiotics and in response have cracked down on this practice.

The U.S. Food and Drug Association recognizes that surfaces and equipment cannot be completely devoid of any and all bacteria. That’s why there is an acceptable level of bacteria allowed in food processing and producing facilities.

COPAN’s sterile templates, available in 4 x 5cm and 10 x 10cm, will help determine the colony forming units (CFU) per cm². And although some dirt is essential to our health, there are dangerous bacteria that can cause food borne illnesses. COPAN’s SRK (Swab Rinse Kit) help detect these hazardous pathogens, such as E. coli, Salmonella and Listeria.

“We have become so efficient at avoiding infections that the appearance of a dangerous strain of Escherichia coli (aka E. coli) in a beef shipment or Listeria monocytogenes in spinach leads to massive recalls and exportation bans, along with accompanying media hysteria. Microbes scare all of us, and rightly so since some of them are truly dangerous,” wrote Finlay and Arrieta.

Lesson learned: a little dirt won’t hurt. So, put that antibacterial gel away and let your kids make a couple of mud pies.