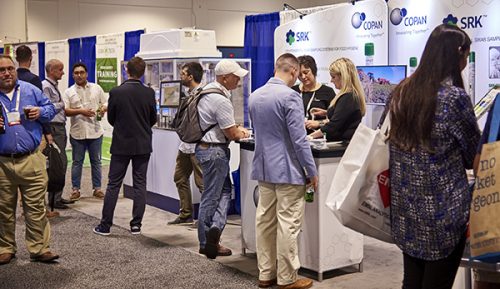 Coolers constantly filled with ice cream and an open bar are always a draw at the International Association of Food Protection (IAFP) conferences. But at this year’s Tampa, Florida event, there was another item causing quite the sweet buzz.

Meeting attendees slurped local IPAs and munched on Häagen-Daz bars, while lining up to check out the “MilkyWay,” COPAN’s newest automation which made its North American debut at IAFP 2017 from July 9 through July 11. Known for its innovative spirit and extensive resumé in automation, COPAN drew from this revolutionary well and designed the first fully automated instrument for preparing pour plate Total Viable Bacterial counts (TVCs) on liquid samples.

The instrument on display at IAFP, which was specifically adapted for processing yogurt, mixes molten agar with the sample. After the plates cool down and the mixture is set, it is then overlaid with another layer of agar. As explained during the conference, this highly adaptable instrument can be customized to perform more widespread applications that involve mixing liquid or liquefied samples with molten agar.

A total of 54 liquid samples can be loaded onto the sample tray. The samples must be liquefied now, yet COPAN is currently designing an addition to the MilkyWay that automates sample processing. Therefore, soon technicians could place something as solid as a steak or carrots into the front end of the instrument and the food will be stomached and diluted prior to processing.

An onboard Hamilton pipetting engine then aliquots and dispenses the samples into a petri dish set in the carousel, while simultaneously mixing it with molten agar. That plate then drops down inside the machine and is cooled down by fans. After cooling, it’s released to the carousel and ready to be transferred to the incubator. The instrument is fitted with a HEPA filter to prevent cross-contamination.

Multiple customers remarked on the MilkyWay’s small footprint, saying the instrument would be a welcome addition to their laboratory. COPAN was ecstatic to unveil this highly-anticipated automation that will standardize what is currently a labor-intensive manual process. In addition to its efficiency, the MilkyWay’s automation will free up talented technicians enabling them to focus on loftier tasks.

A Swab Story in Food Safety

While automation was the showboat of COPAN’s booth, the Murrieta, California-based company was also excited to feature our new film for the first time at the meeting. The video, which played on a loop at the booth, highlights COPAN’s Swab Rinse Kit (SRK®) line of products. The film, shot on location in the Imperial Valley, a small farming community on the Mexican border of California, captures the essence of our food’s journey from farm to fork.

COPAN recently expanded the U.S. production of this product line and was thrilled to showcase the extensive line of swabs, templates and spreaders that makes up this environmental sampling line.

Many customers inquired about the varietal line that includes swabs in multiple sizes and either packaged as a dry swab in a kit with a separate tube of solution or pre-moistened with a diluent, rinse or enrichment broth. Using swabs to access small nooks and crevices is one of the reasons customers are looking to add swabs to their food safety regime. While pre-moistened swabs improve the uptake of the sample some customers prefer the option of a dry swab.

COPAN’s SRK® solution, a phosphate buffering solution, which neutralizes antimicrobial agents, was also a hot item. Neutralizers are often used in the food industry because they help paint a clear picture of any bacteria present on the surface without the interference of cleansing agents.