Ask ESwab: Is Having Money a Health Hazard? 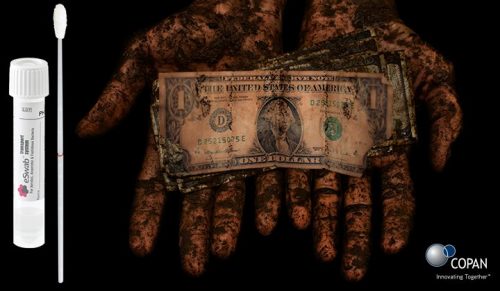 You know the old saying, ‘put your money where your mouth is?’ Well, please don’t.

Straight from the inquiring minds of a recent study, Filthy Lucre: A Metagenomic Pilot Study of Microbes Found on Circulating Currency in New York City,” one team discovered just how dirty money really is. With the help of ESwab™, Maritz et. al swabbed $1 bills they collected from a New York City bank. By using metagenomic sequencing, they could identify various bacteria, viruses and archaea present on our currency and determined whether they maintained viability while in circulation.

That Washington Gets Around
The idea that microbial communities can linger on every day surfaces is not new. In fact, reports dating back to the 1800s were already speculating how the hygiene of our tender could harbor microbes linked to pneumonia and other enteric diseases. Since then, there have been other studies cautioning against bacteria on cell phones, computer keyboards and even the subway. But rather than speculate, the study investigates and asks the question, is money harmful to our health? To put our notes to the test, $1 bills were chosen thanks to their high volume and short life span.

Shotgun Metagenomic Sequencing– It’s As Cool As It Sounds
To test their theories, the creation of a metagenomic profile was broken down into three parts. First, a test was performed to measure if microbial DNA was even detectable. To do so, twenty (20) $1 bills were collected from a New York City bank in February of 2013, labeled as the “winter sample.” For every two individual bills, one ESwab™ was moistened in molecular biology grade water (Fisher Scientific), and then used to swab the bills’ front and back. DNA was extracted from each using the PowerSoil DNA Isolation kit (MOBIO, catalog #12888). DNA from the swabs was then concentrated after the extraction process using SpeedVac (Savant), and then combined to recover the highest number of organisms possible. Using the Illumina Library Preparation Kit (Kapa Biosystems), metagenomic libraries were made from all the DNA from NYC’s currency, and the metagenomic data was subsequently analyzed.

For part two, samples were collected from the same bank six months later, labeled the “summer sample” and processed the same way as a comparison of the microbial communities over time.

Part three was performed to determine if viable microbes could be cultured in vitro, and if so, how they compare to the other sequence-based method. For part three, two additional groups of twenty $1 bills were collected. One in September 2013 (known as Culture 1), and another in October of 2013 (known as Culture 2), and then swabbed in the same fashion. Next, they were placed in 5ml of LB (Luria Broth). After mixing the sample in the broth, 1 ml of LB was placed onto five different LB agar plates, then incubated at 37 degrees Celsius for 72 hours. After 72 hours, colonies from the plates were scrapped and used for DNA extraction: one per plate. Altogether, there were four samples including: one from both the winter and summer swabbed bills, and two from the cultured or “fall collection.”

If We Had a Dollar for Every Microbe . . .
By using shotgun metagenomics, eukaryotes were identified as the most prevalent of sequences, followed by bacteria, viruses and then archaea. Human eukaryotes dominated the microbial population with human skin and oral commensals, which included Propionibacterium acnes (acne), Staphylococcus epidermidis (staph) and Micrococcus luteus (found in the normal flora of skin). When it comes to leaving a microbial “fingerprint,” such as these, the team concluded the surface type, hygiene of the individual, frequency of interaction and location of these items, all influence what “lingers.” Indicative by the types of organisms the study found present on those dirty ‘dolla bills’, it appears cash is a favored form of currency in exchange for commerce, food, travel, but also the sex trade. The team concluded that these present microbes are mostly sourced from the human microbiome, food and environment, and it is possible to maintain viability “through contact with human skin.”

We’re Willing to Wager
Before you go Bitcoin or revert to the barter system, it is agreed that further testing needs to be done to determine whether these microbes are active or dormant, what kind of survival rate they sustain, and whether they can be transferred from paper to person. So, it is still unclear on their potential to infect others. What IS clear is the fact that ESwab™ can help maintain viability of microbes and comes in handy when swabbing your singles. In fact, when it comes to whose swabs are superior for collection, transport and maintaining viability, we’re willing to wager on COPAN every time.